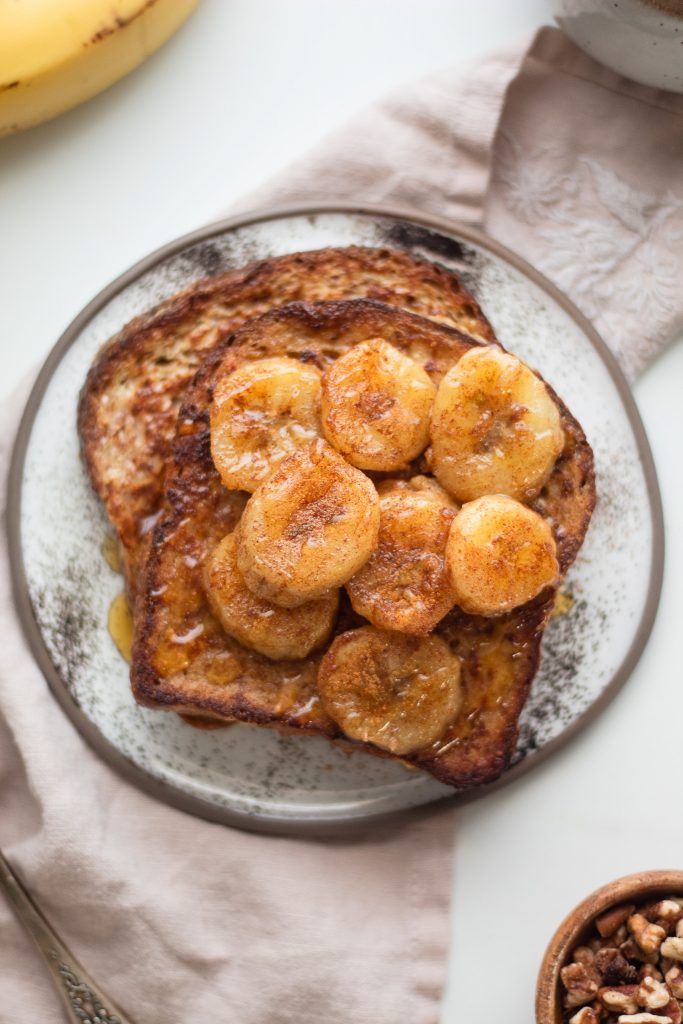 Sprouted French Toast with Caramelized Bananas – the ultimate brunch food that tastes so good and is pretty darn healthy to boot! Sweet caramelized bananas top the perfectly cooked pieces of french toast…perfect with coffee on a slow weekend morning!

This post was originally published in February 2018 – I’ve since updated the photos and added additional blog content. Enjoy!

I’ve always been a sweet breakfast person. I remember growing up, most of my breakfasts consisted of Toaster Strudels, big bowls of Honey Smacks or  Pop Tarts (only the brown sugar + cinnamon kind, duh!) So, needless to say, french toast is a big love of my life.

I do love the eggs and toast I have each morning for breakfast and all of their savory goodness. However, on special occasions, bread related breakfasts are always on tap. Pancakes? Sure. Waffles? Okay! French toast? YASSSSSSSS. Note the extra enthusiasm there, folks.

Why You’ll Love This Breakfast:

There is just something about that eggy, cinnamon-y mixture that you dip the bread in. The way it gets crispy and golden brown on the outside, but soft and sweet on the inside. Topped with maple syrup and butter, stick a fork in me! I’m done.

And when you decide on a whim to caramelize bananas to smother the french toast in, well golly, I really AM done. 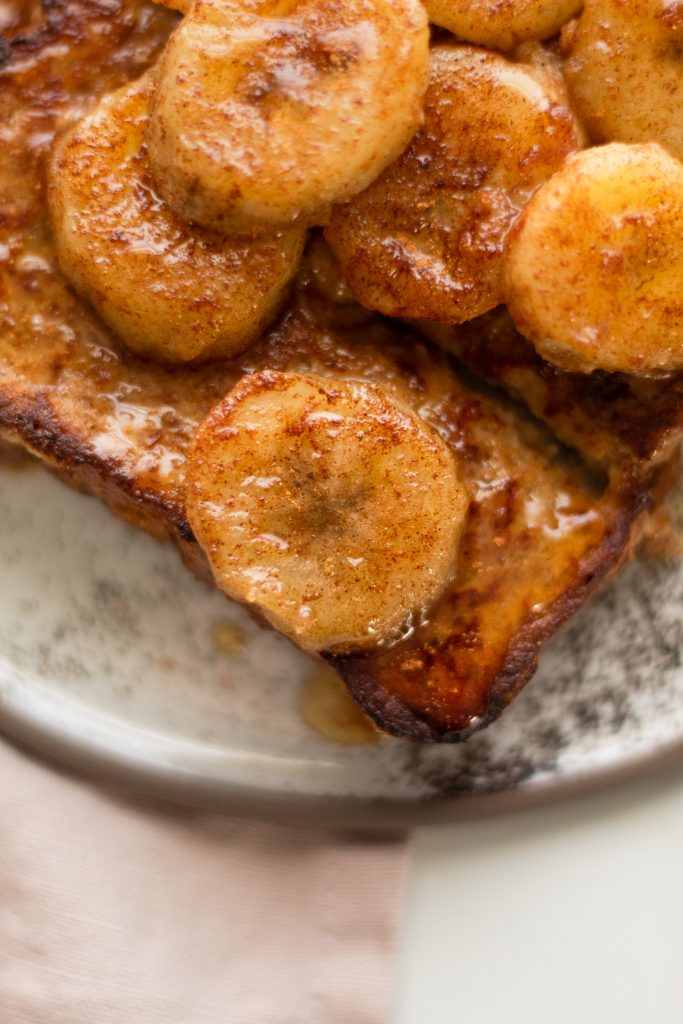 This french toast is made with sprouted bread! I really recommend that you use sprouted bread for this recipe. It gives it a super hearty flavor not to mention the extra nutrients you get!

The caramelized bananas are a real joy. I feel like I’m channeling my inner grandma when I tell you that they’re nature’s candy.

I basically took some coconut oil and cinnamon and put that in a pan and let it bubble up and melt together. Then I cut up some bananas and let it do its thang – aka, let them simmer for a few minutes, turning them periodically. 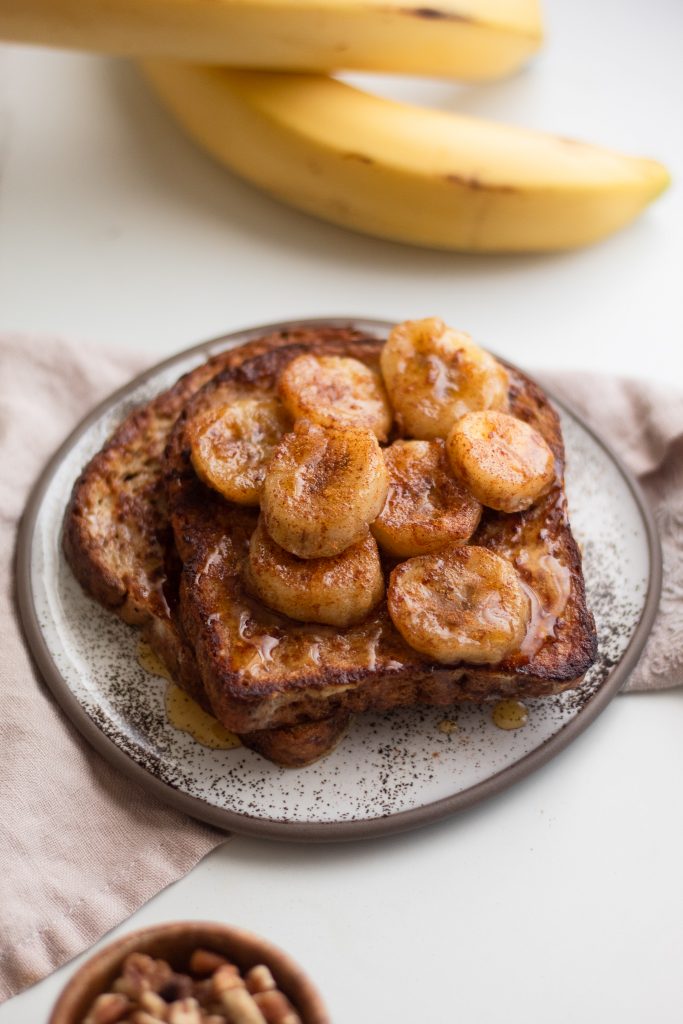 My house smelled like a banana bread explosion – in a good way.

Combined together each bite was perfect! Golden toasted french toast smothered in those sweet bananas….yes please!

So let’s get into what you need to make this dish!

I always think it’s best to get all of the ingredients out and ready to go for the recipe! So grab the bread, milk, eggs, brown sugar, bananas…all the things!

And let’s begin by whipping up the custard for the french toast.

To a bowl large enough that you can dip your bread in, add in the milk, eggs, vanilla extract cinnamon and brown sugar and whisk together until fully combined. Set this aside for now. 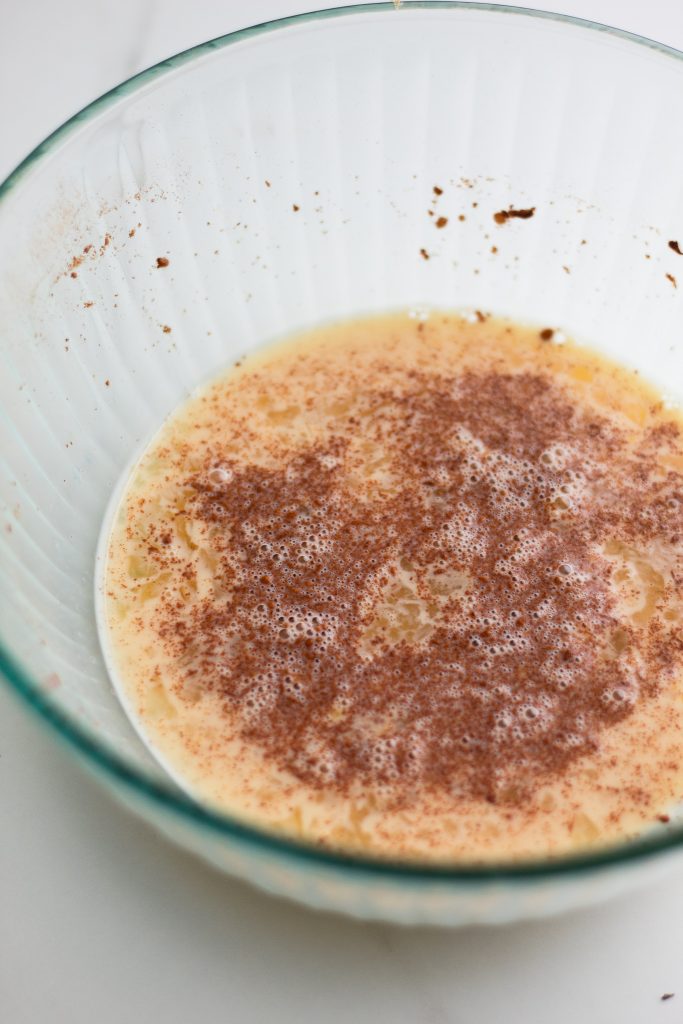 Grab your bananas and slice them. In a skillet, add the coconut oil on medium heat and let it melt. Add the bananas as well as cinnamon and let those cook for 3-4 minutes, turning periodically to make sure they don’t stick to the bottom. 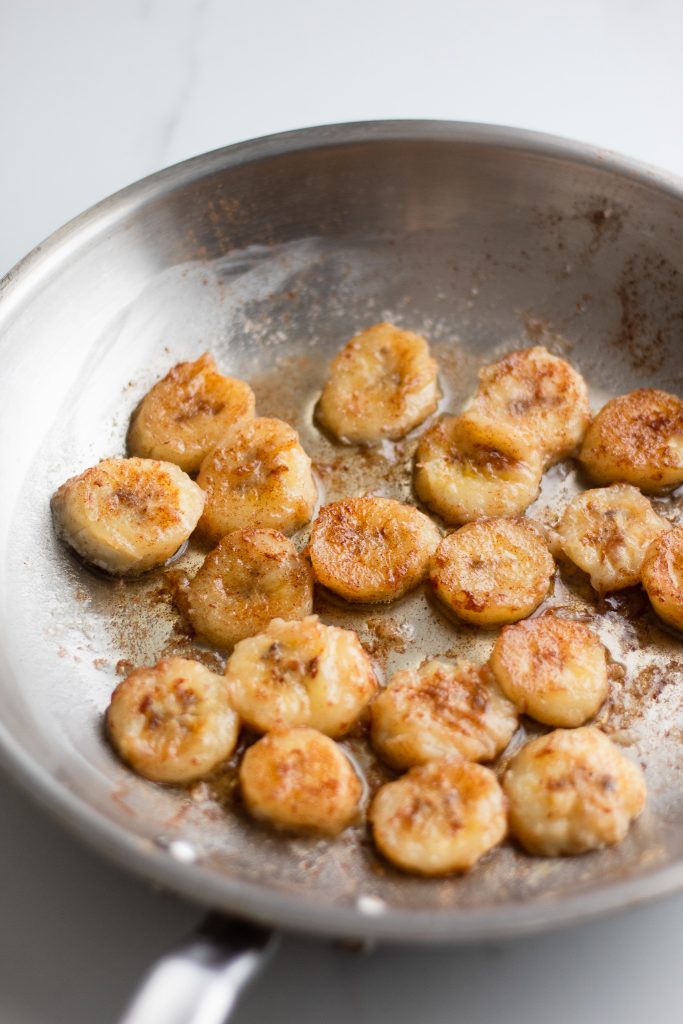 Once they are done, remove them from the skillet onto a plate. Add butter to the skillet and let it melt.

Dip the bread into the egg mixture and cook each slice 2-3 minutes, flipping halfway until the bread is golden and cooked through. It should be golden brown and crispy! 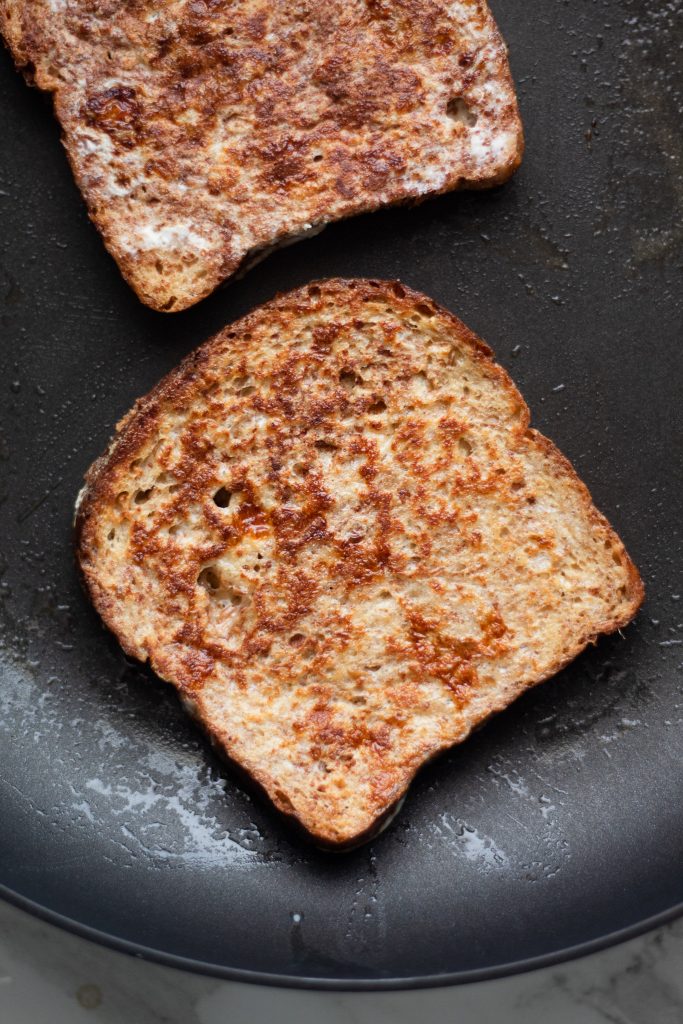 Repeat with the remaining slices of bread and then it’s time to serve!

Top the finished french toast with the caramelized bananas and then…this crispy sweet and golden bread is basically begging for some maple syrup on top. And because ya girl doesn’t do anything halfway – maple syrup it is! 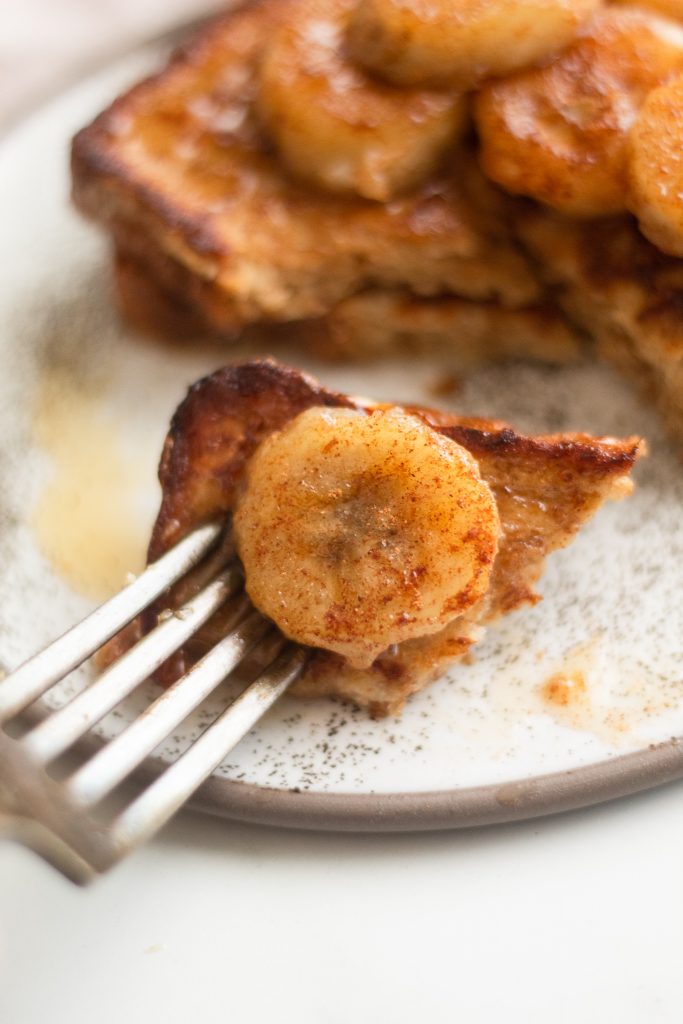 Eat immediately while warm with orange juice, coffee or maybe even a mimosa! This is a delight. Perfect for brunch, breakfast for dinner or breakfast on a weekday morning! 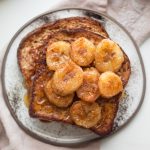 Sprouted French Toast with Caramelized Bananas - the ultimate brunch food that tastes so good and is pretty darn healthy to boot! Sweet caramelized bananas top the perfectly cooked pieces of french toast…perfect with coffee on a slow weekend morning!

This website uses cookies to improve your experience while you navigate through the website. Out of these, the cookies that are categorized as necessary are stored on your browser as they are essential for the working of basic functionalities of the website. We also use third-party cookies that help us analyze and understand how you use this website. These cookies will be stored in your browser only with your consent. You also have the option to opt-out of these cookies. But opting out of some of these cookies may affect your browsing experience.
Necessary Always Enabled
Necessary cookies are absolutely essential for the website to function properly. These cookies ensure basic functionalities and security features of the website, anonymously.
Functional
Functional cookies help to perform certain functionalities like sharing the content of the website on social media platforms, collect feedbacks, and other third-party features.
Performance
Performance cookies are used to understand and analyze the key performance indexes of the website which helps in delivering a better user experience for the visitors.
Analytics
Analytical cookies are used to understand how visitors interact with the website. These cookies help provide information on metrics the number of visitors, bounce rate, traffic source, etc.
Advertisement
Advertisement cookies are used to provide visitors with relevant ads and marketing campaigns. These cookies track visitors across websites and collect information to provide customized ads.
Others
Other uncategorized cookies are those that are being analyzed and have not been classified into a category as yet.
SAVE & ACCEPT
45 shares