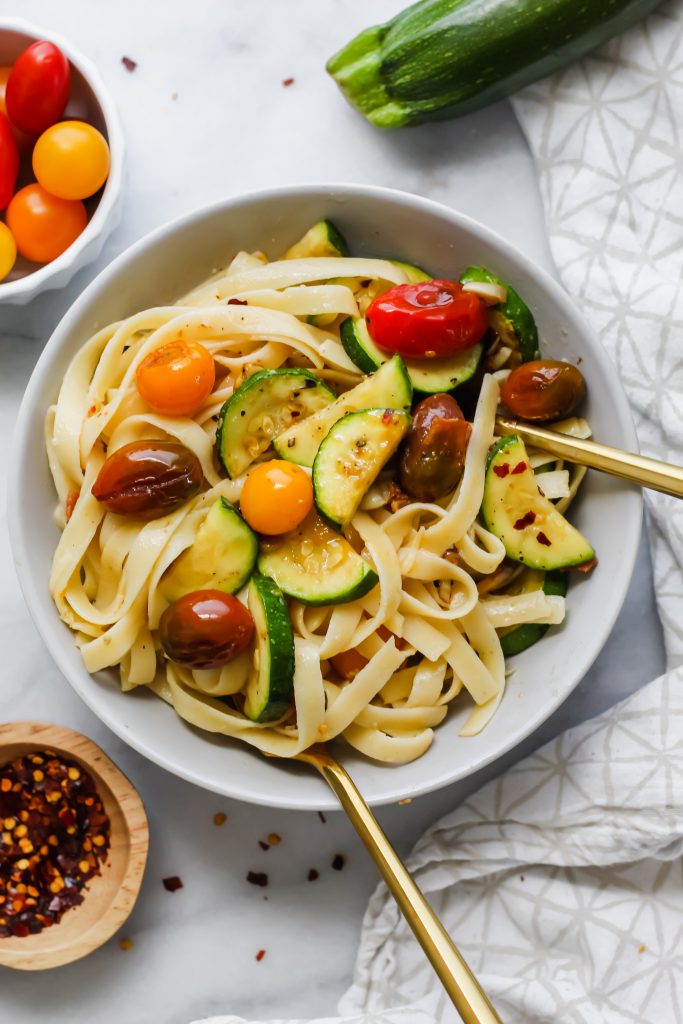 This Charred Tomato and Zucchini Fettuccine is super easy, creamy and full of delicious flavors like bacon, lemon and garlic! Ready in 25 minutes! Yes please.

This recipe was originally published in July 2018. I’ve updated the photos and tweaked the recipe instructions!

Any meal that requires pasta, fresh veggies and a little bit of cheese is probably one of my favorite things in the world. Add in bacon and my heart may explode with joy. Why do cheese, bacon and pasta evoke so much love in my heart?! I don’t know, but I never want it to end. 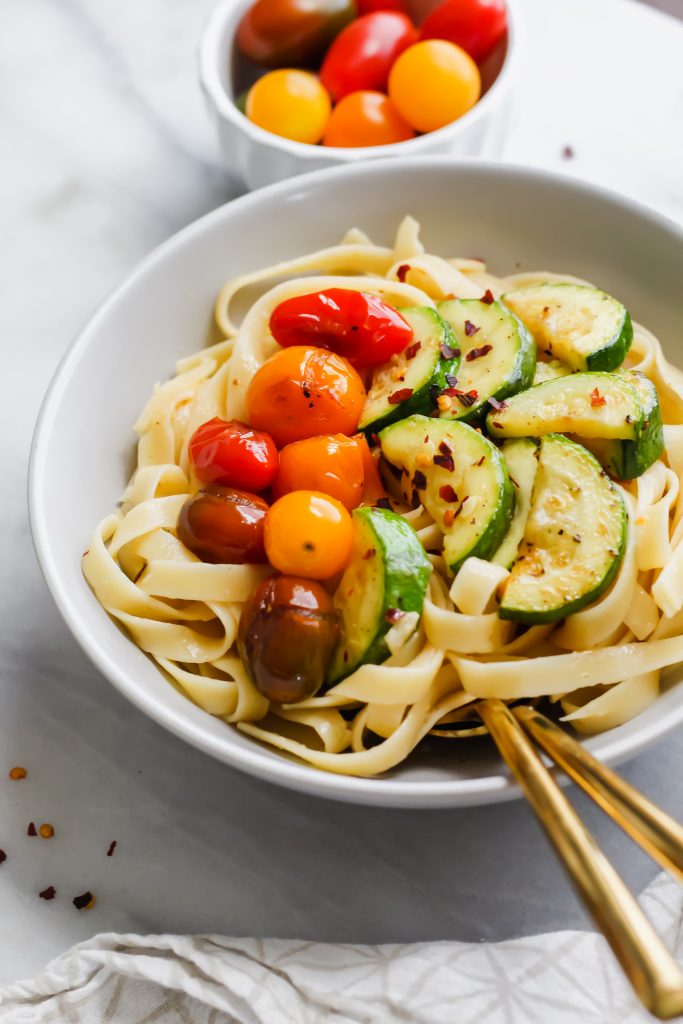 But really, guys. If Summer was ever personified into a meal – THIS WOULD BE IT. It’s super easy, requires minimal work and is literally BURSTING with flavors. No really, there are tomatoes that actually burst in your mouth in this meal. It’s that crazy good. 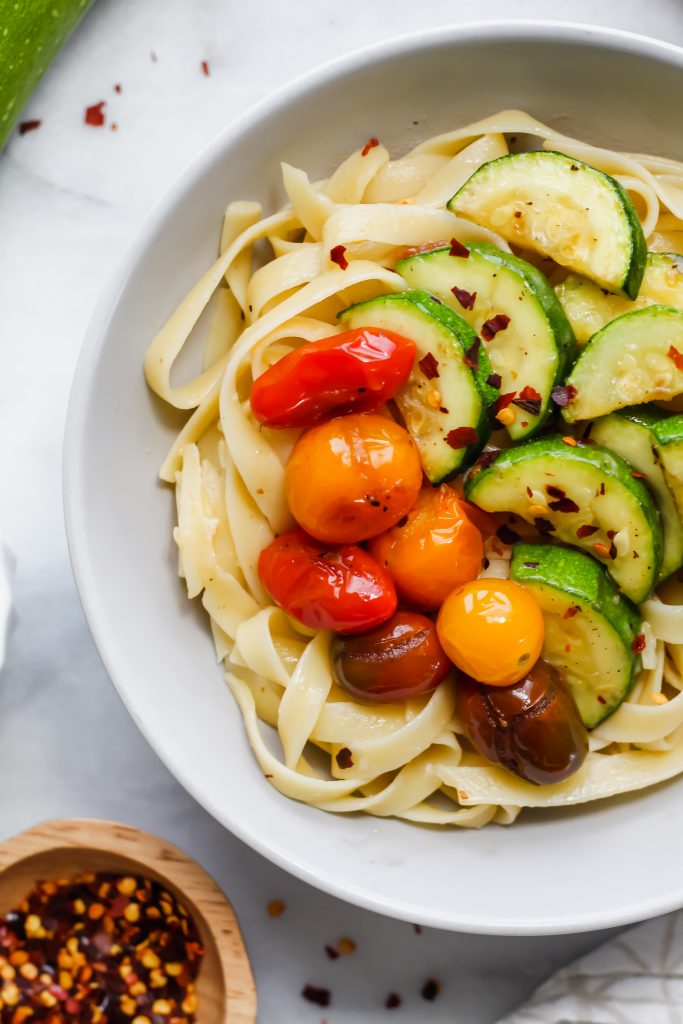 Ingredients You Need for Charred Tomato and Zucchini Fettuccine with Bacon:

How to Make Charred Tomato and Zucchini Fettuccine with Bacon:

Fry up a few slices of bacon in a large-ish pan. Oh, and keep the grease once you’re done. Yes, that good good bacon grease. Speaking of bacon grease, did you know that I have a recipe on the blog for the BEST Southern Biscuits and Gravy ever?! In my family, it’s actually called Grease Gravy – because the base of the dish is made from bacon grease. Yup, it’s amazing. Okay, back to the pasta! 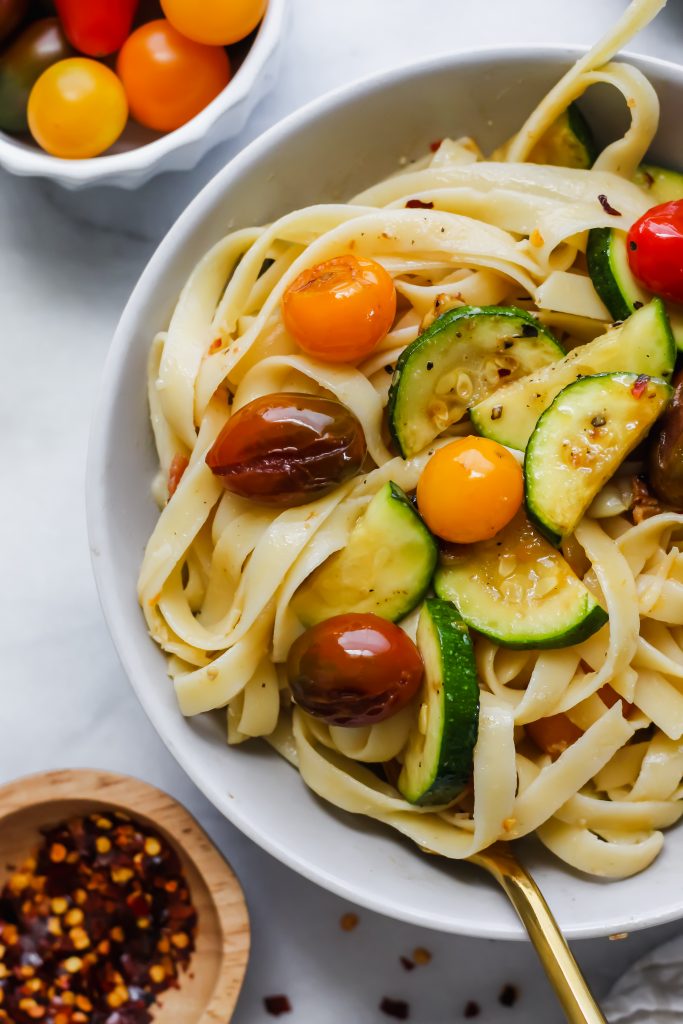 The bacon grease will be the main “oil” that you will use to saute both the zuchinni and the cherry tomatoes. So, while your bacon is frying, go ahead and start boiling your water for pasta! Sprinkle a good amount of salt in it (because you know that adds wonderful flavor and isn’t just a wives tale, right?) and when it begins to boil, throw in your fettuccine. 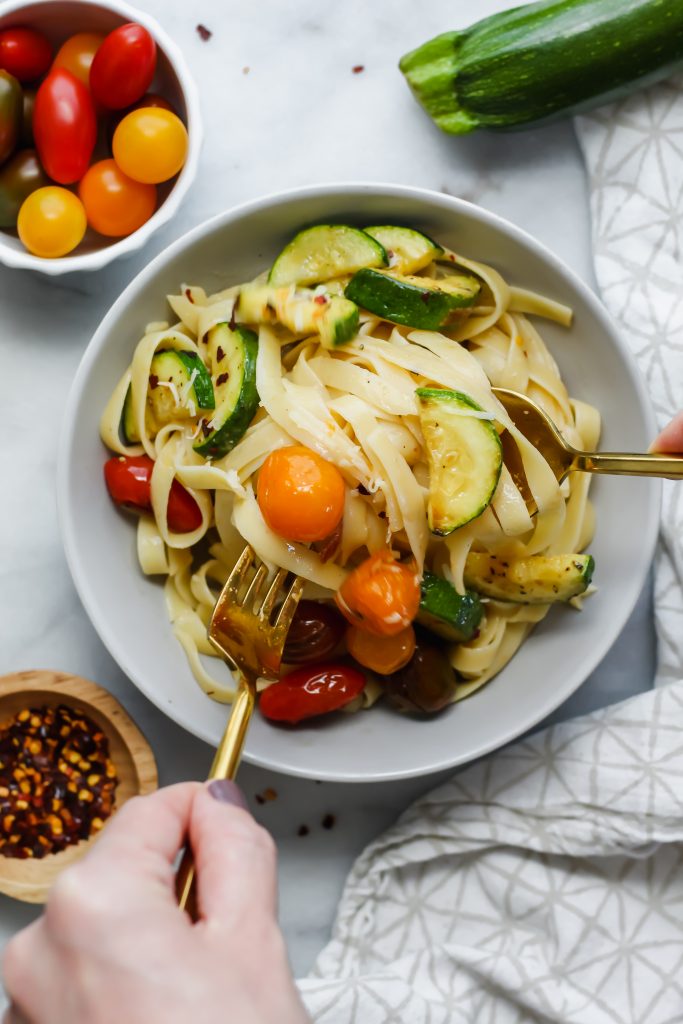 In the meantime, now that the bacon is done and you’ve transferred it to another plate, you’re going to add in your halved zucchini pieces to the same pan. Add a pinch of salt and cook for only 2-3 minutes, flipping halfway through. You want these guys to cook a little bit but really still have a bite to them. It adds a wonderful texture to an already very creamy pasta.

Next, remove the cooked zucchini and add in your cherry tomatoes! You guys, this is the VERY FIRST SUMMER OF MY LIFE that I have liked tomatoes. I don’t know what happened. My taste buds matured, I guess? I think it all started out when we began to make my Easy Homemade Salsa on the reg which features fresh roma tomatoes. I don’t know. But for whatever reason, I’m popping these little cherry tomatoes like candy. You’re going to want to cook them for 4-5 minutes, until they get really charred. I even had a couple of mine burst in the pan and that’s totally okay too! Once they are almost done, add in some fresh garlic and allow it to cook for 1-2 minutes in the pan. Remove these from the pan onto the same plate as the zucchini. 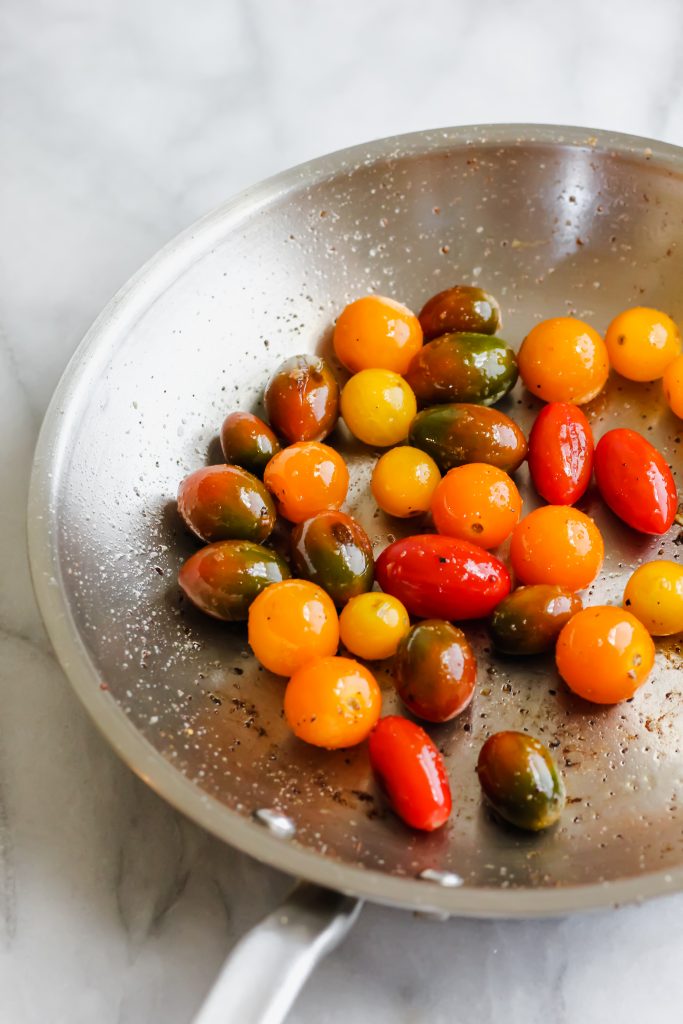 By now, your pasta should be done! Drain it in a colander but reserve about a cup of the starchy pasta water.

Next, you’ll just have to trust me with this one. Add your pasta STRAIGHT INTO THE PAN WITH THE VEG AND BACON GREASE. Toss it around gently to combine. And you may reaaaallly have to trust me with this one – add in that reserved cup of pasta water! Let it simmer and all the juices and bacon fat and everything meld together into one creamy pot of pasta. Let it simmer for about 3-5 minutes, gently stirring every once in a while. Then, add your cheese! You can do as little or as much as you’d like – I ended up adding about ⅓ of a cup of freshly shredded parmesan cheese. It was just the right amount for me. 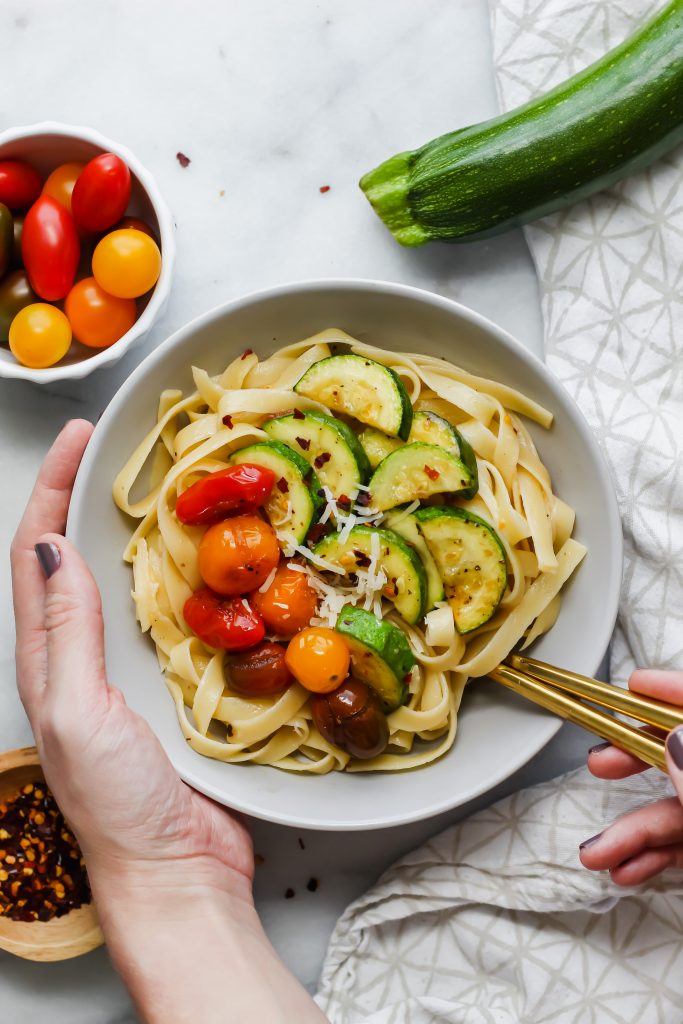 Lastly, we can’t forget about the actual bacon! Roughly chop it, add it to the pasta. Squeeze half a lemon on it. Add a generous dose of salt and pepper to season and taste. Add red pepper flakes if you’re feeling spicy. 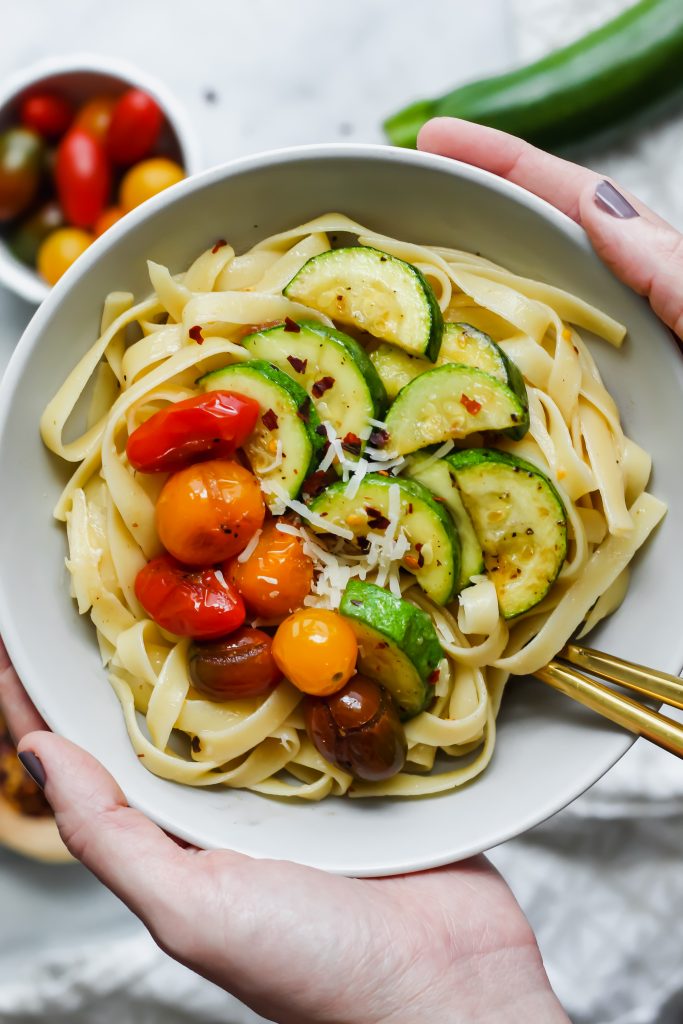 And then you eat. All of the pasta. In one sitting. Or that’s what it felt like I did. #noregrets 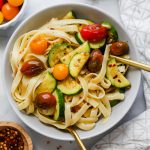 This website uses cookies to improve your experience while you navigate through the website. Out of these, the cookies that are categorized as necessary are stored on your browser as they are essential for the working of basic functionalities of the website. We also use third-party cookies that help us analyze and understand how you use this website. These cookies will be stored in your browser only with your consent. You also have the option to opt-out of these cookies. But opting out of some of these cookies may affect your browsing experience.
Necessary Always Enabled
Necessary cookies are absolutely essential for the website to function properly. These cookies ensure basic functionalities and security features of the website, anonymously.
Functional
Functional cookies help to perform certain functionalities like sharing the content of the website on social media platforms, collect feedbacks, and other third-party features.
Performance
Performance cookies are used to understand and analyze the key performance indexes of the website which helps in delivering a better user experience for the visitors.
Analytics
Analytical cookies are used to understand how visitors interact with the website. These cookies help provide information on metrics the number of visitors, bounce rate, traffic source, etc.
Advertisement
Advertisement cookies are used to provide visitors with relevant ads and marketing campaigns. These cookies track visitors across websites and collect information to provide customized ads.
Others
Other uncategorized cookies are those that are being analyzed and have not been classified into a category as yet.
SAVE & ACCEPT
275 shares