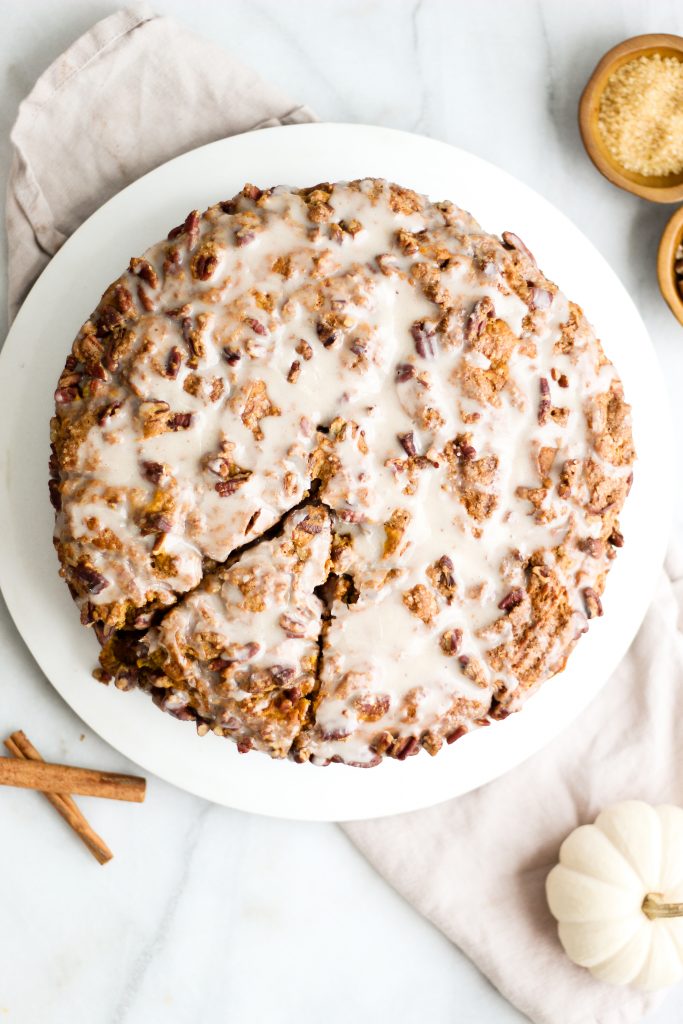 This Pumpkin Swirl Skillet Bread is SO delicious! Made in a skillet, this is a one bowl baking recipe that yields a wonderfully sweet, moist and dense bread! And don’t forget the cinnamon pecan topping. YUM!

Happy Friday, you guys! So excited to be sharing another pumpkin recipe with y’all today.

I was baking last weekend and I swear, it brought me SO much joy. I had on a lovely soundtrack in the background of Fall music, my windows were open, I could hear the leaves blowing around as I kneaded dough. It was lovely. Highly recommend baking in the Fall, y’all. 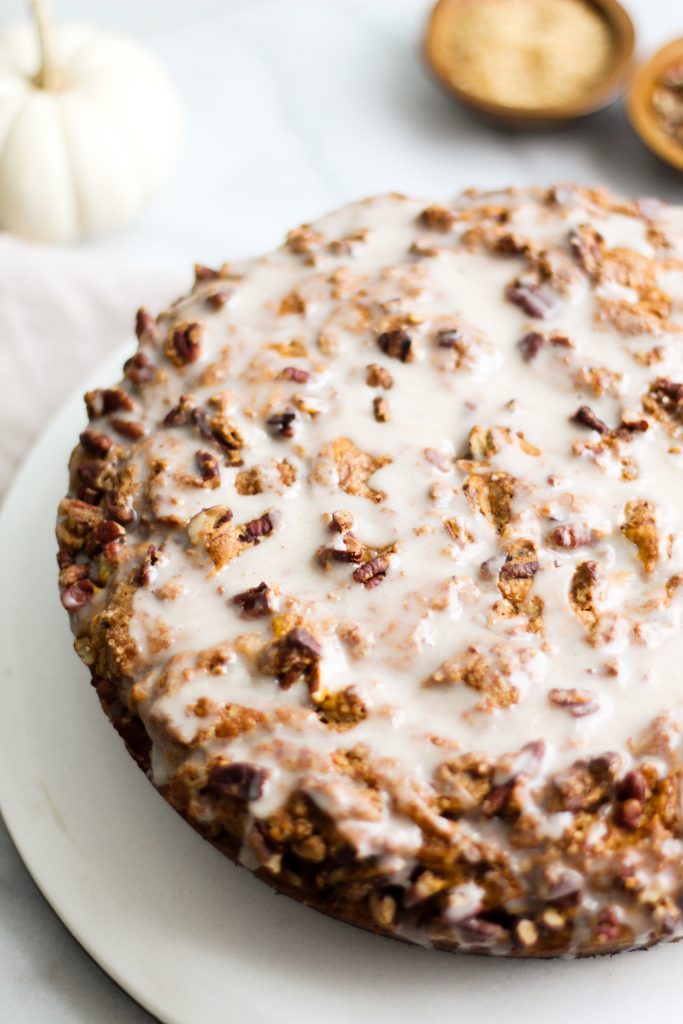 And speaking of baking, I don’t know about you guys – but I just can’t get enough of the sweet pumpkin or apple recipes this year! So I was super excited to start developing this Skillet bread because hello! It’s made in ONE SKILLET! It’s super simple, so delicious and I can’t wait to tell you all about it!

Why this Skillet Bread is Amazing:

Well first, like I said above, the fact that it’s made in one skillet (and mixed together in only two bowls), makes me incredibly happy. Raise your hand if you’re all about less dishes to wash (*every person in the world raises hands*)

This Pumpkin Swirl Skillet bread is SO SOFT, y’all. Seriously – it’s soft and moist and everything that you hope your pumpkin bread is. 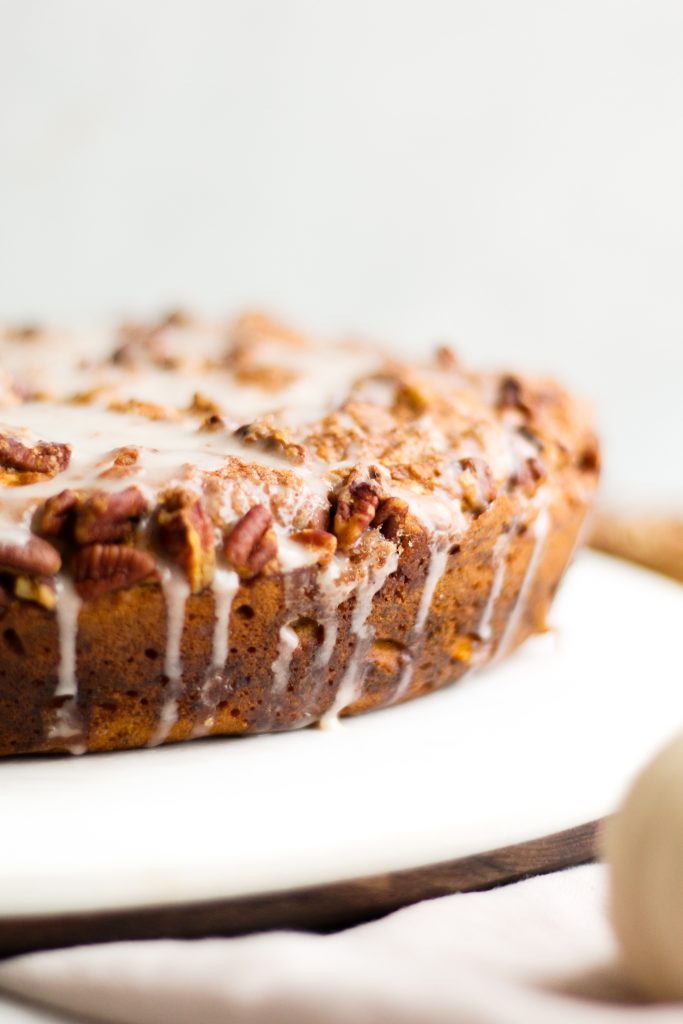 I honestly hesitated on whether to call it bread or cake. But overall, I decided with bread. The moistness of the bread overrides the fluffiness of a normal cake!

I also love that it’s not overly sweet. It has an intense pumpkin flavor which helps naturally sweeten it but the bread itself isn’t like, *sugar crash* sweet. For this bread, I used pumpkin puree (not pumpkin pie mix!) which helps give it the natural pumpkin taste without the extra sugar involved. 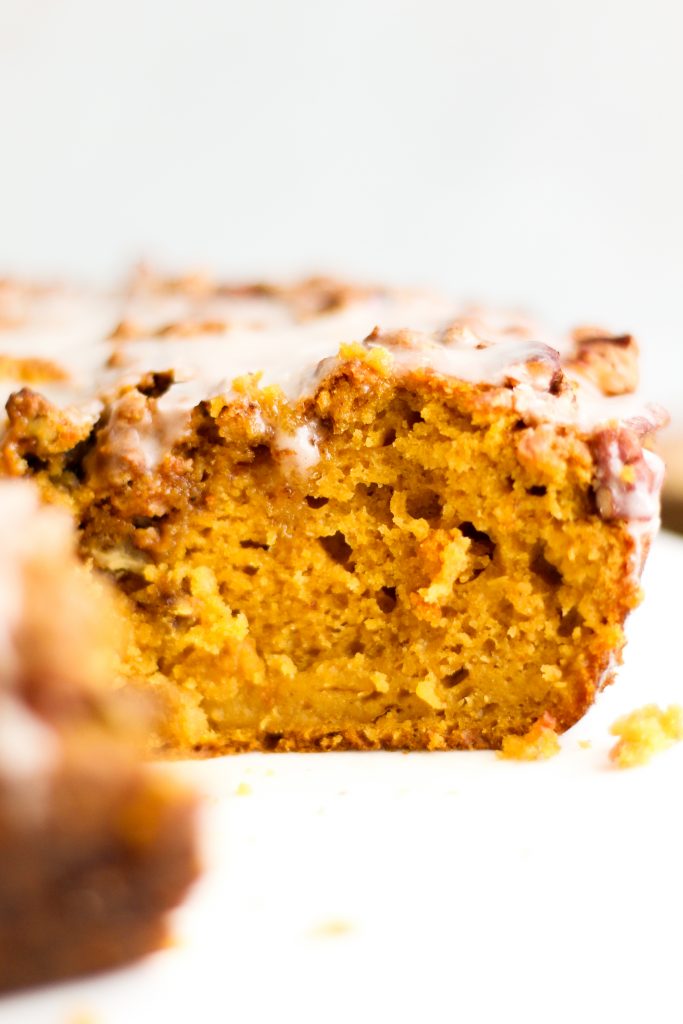 My favorite part of the bread though? The crunchy cinnamon pecan topping! The crunch of the pecans adds SO much to the bread, as well as the spicy cinnamon glaze. It gives the bread almost like a glazed donut type of feel.

The bread itself is spiced perfectly with all of your favorite cozy Fall spices – it’s warm and makes you want to curl up under a blanket with all of the cinnamon + pumpkin pie spice flavors!

You could definitely eat this bread for dessert, a mid-say snack or hey, even breakfast with a hot cup of coffee! 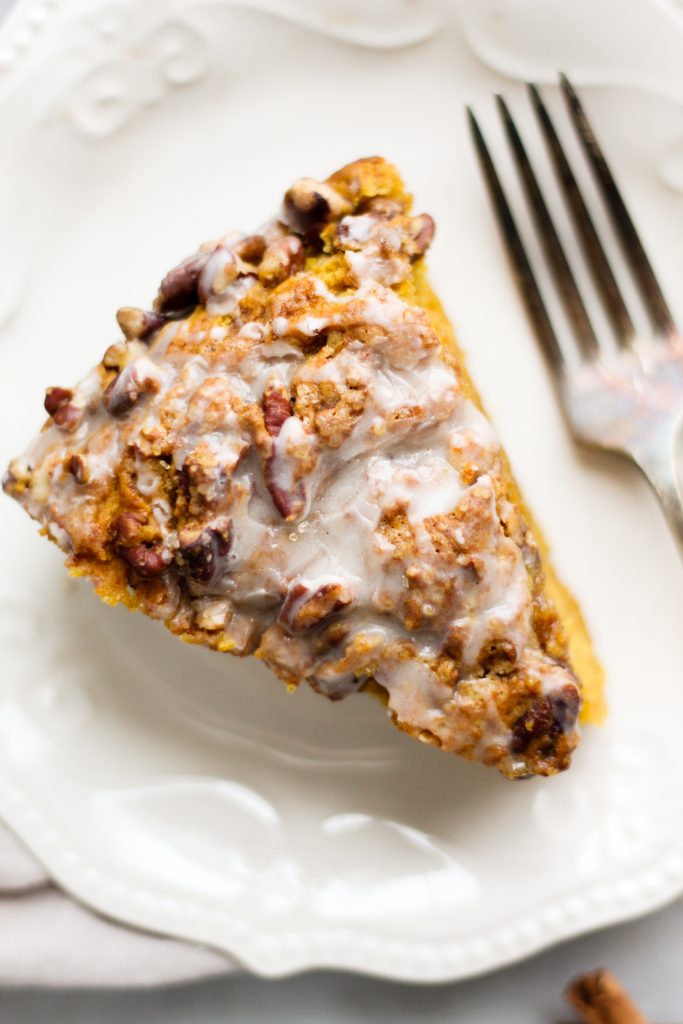 So, let’s get into what you need to make it!

For this recipe, I used my 10 inch cast iron skillet. I think that is the best size for this particular recipe! Make sure that your skillet is SEASONED/GREASED! I found this article from Lodge to be particularly helpful in deciding how to season your cast iron skillet.

Next, time to get out your mixing bowls! First off, whisk together your dry ingredients until they’re combined. This will ensure that they are spread evenly throughout when you mix them in with your wet ingredients. 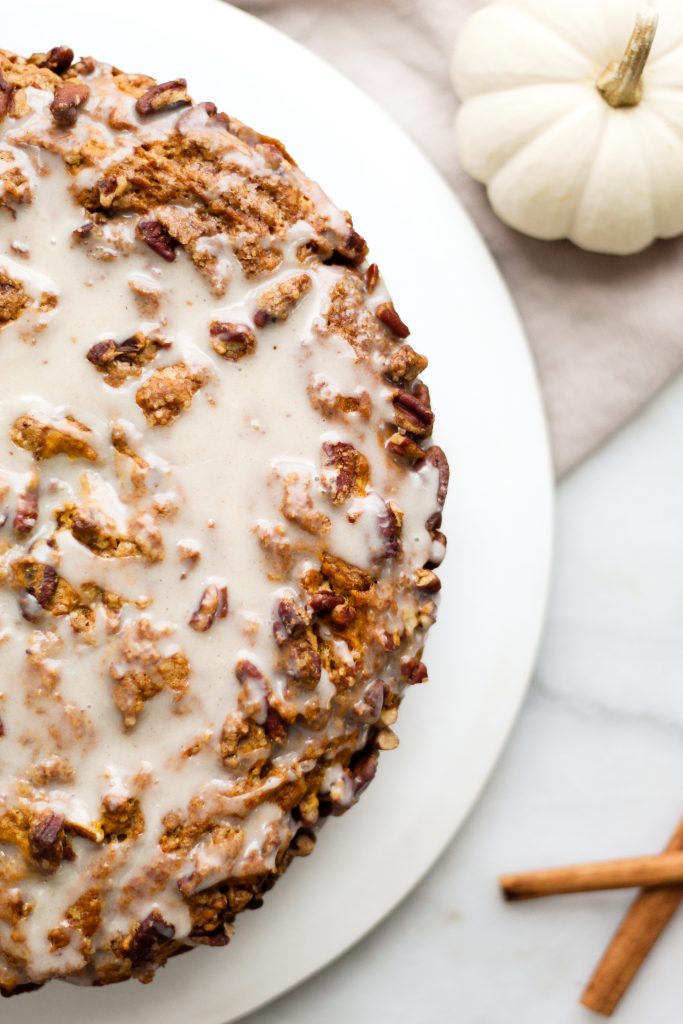 In a larger bowl, add in the butter and melt it. Let it cool for a couple of minutes. Then add in the brown sugar and eggs and whisk together until combined. Lastly, add in the pumpkin puree, the greek yogurt and the vanilla extract. Time to combine the wet with the dry ingredients! Do this carefully – it will be a LOT of batter! 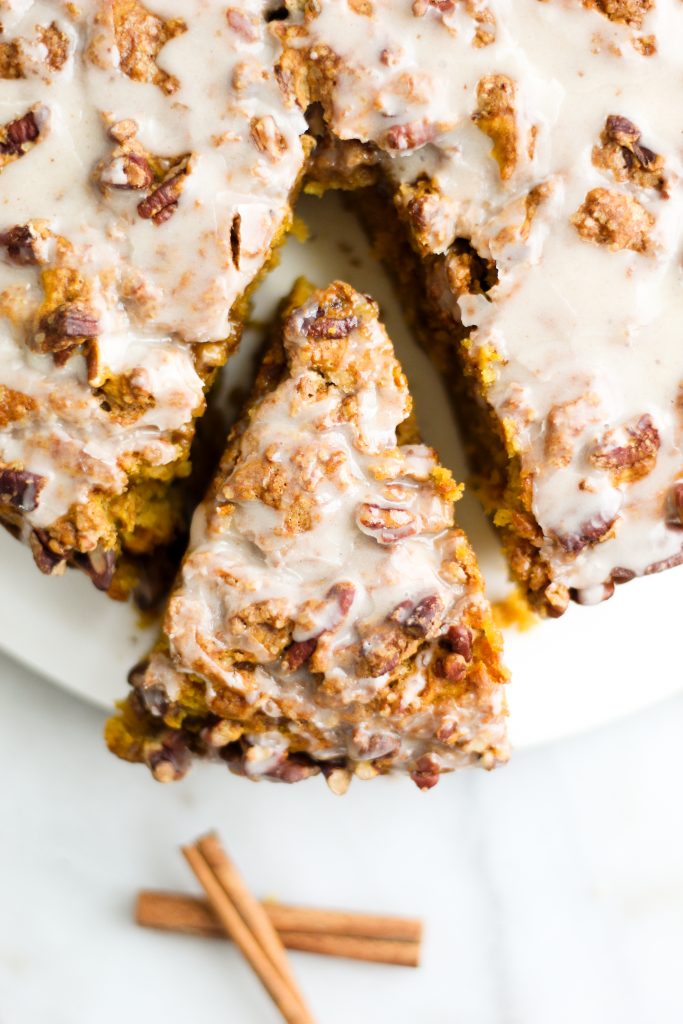 I sprinkled just a dusting of flour on top of my cast iron skillet and then added in the batter and spread it out evenly.

To reduce dishes, add the pecans + spices + turbinado sugar in the same bowl that you used for your dry ingredients. Mix together until combined!

Spread the cinnamon sugar pecan mixture overtop of the skillet with the batter evenly and then, using a butter knife, carefully *swirl* the mixture into the bread. It should look something like this: 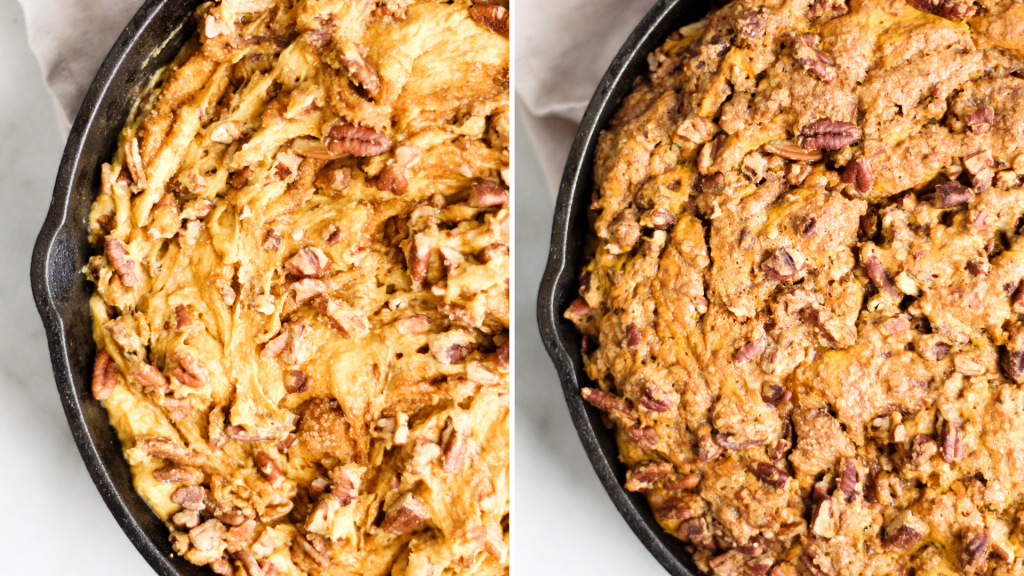 Bake for 55-65 minutes or until a toothpick comes out of the center clean. Let it cool in the pan for a few minutes and then carefully remove to a wire cooling rack to continue to let cool fully.

Once mostly cooled – whip up the spiced glaze! Simply combine powdered sugar, spices of your choice (can do pumpkin pie spice or cinnamon here) with a splash or two of milk until you reach your desired glaze consistency. 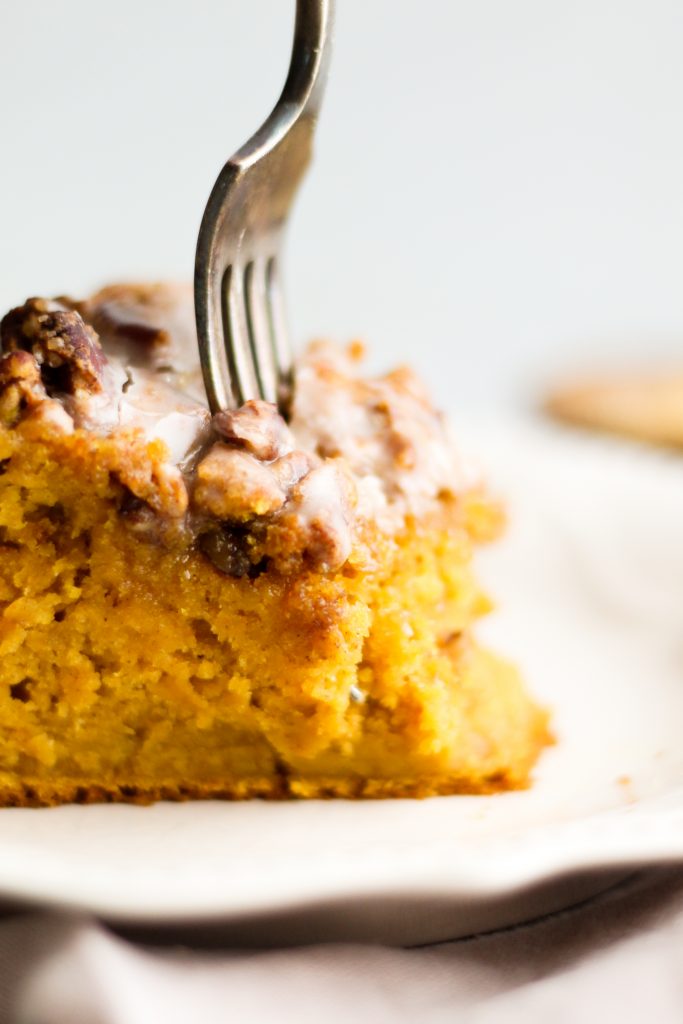 Drizzle generously all over top of the bread.

Did you like this recipe? Here are a few more pumpkin recipes for you to check out:

This Pumpkin Swirl Skillet Bread is SO delicious! Made in a skillet, this is a one bowl baking recipe that yields a wonderfully sweet, moist and dense bread! And don’t forget the cinnamon pecan topping. YUM!

This website uses cookies to improve your experience while you navigate through the website. Out of these, the cookies that are categorized as necessary are stored on your browser as they are essential for the working of basic functionalities of the website. We also use third-party cookies that help us analyze and understand how you use this website. These cookies will be stored in your browser only with your consent. You also have the option to opt-out of these cookies. But opting out of some of these cookies may affect your browsing experience.
Necessary Always Enabled
Necessary cookies are absolutely essential for the website to function properly. These cookies ensure basic functionalities and security features of the website, anonymously.
Functional
Functional cookies help to perform certain functionalities like sharing the content of the website on social media platforms, collect feedbacks, and other third-party features.
Performance
Performance cookies are used to understand and analyze the key performance indexes of the website which helps in delivering a better user experience for the visitors.
Analytics
Analytical cookies are used to understand how visitors interact with the website. These cookies help provide information on metrics the number of visitors, bounce rate, traffic source, etc.
Advertisement
Advertisement cookies are used to provide visitors with relevant ads and marketing campaigns. These cookies track visitors across websites and collect information to provide customized ads.
Others
Other uncategorized cookies are those that are being analyzed and have not been classified into a category as yet.
SAVE & ACCEPT
78 shares