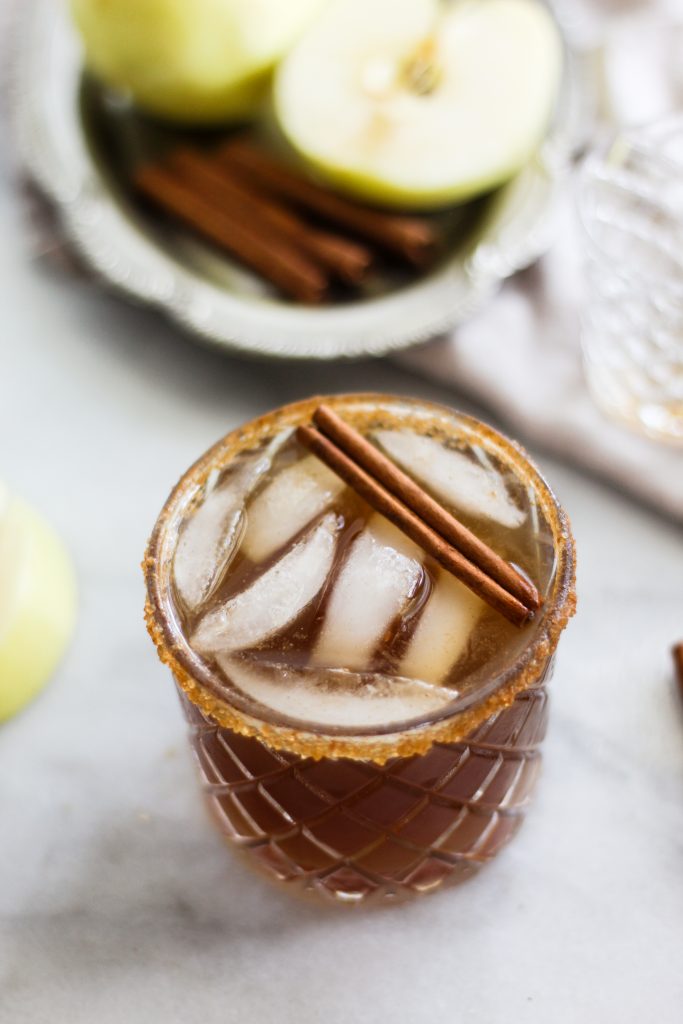 This Spiced Apple Cider Spritz is the ultimate Fall cocktail! Loaded with spiced apple cider, dark spicy rum and a splash of seltzer – this drink has it all for the most fun cocktail hour ever! Don’t forget the cinnamon sugar rim!

Ahhh, it’s time, my friends. Time for another cocktail recipe!

For a long time, I didn’t post cocktails on OBB because honestly, I didn’t think people really liked them. Then I finally reposted my Lemon Lime Margarita recipe and I found out that people do, in fact, like them! Yay!

So it’s been a blast, especially this Fall, testing out different cocktails to make for the blog. And this one is my absolute current favorite.

Why This is my Go-To Fall Cocktail:

I’m all about pumpkin season, y’all. Seriously – give me the pies, the cookies, the breads, the lattes. But what about the very much underrated apple?!

What about the apple cider?! It so easily gets left behind and it makes me so sad! I wanted to make this cocktail to really let the apple cider shine and stand in the spotlight as it should! 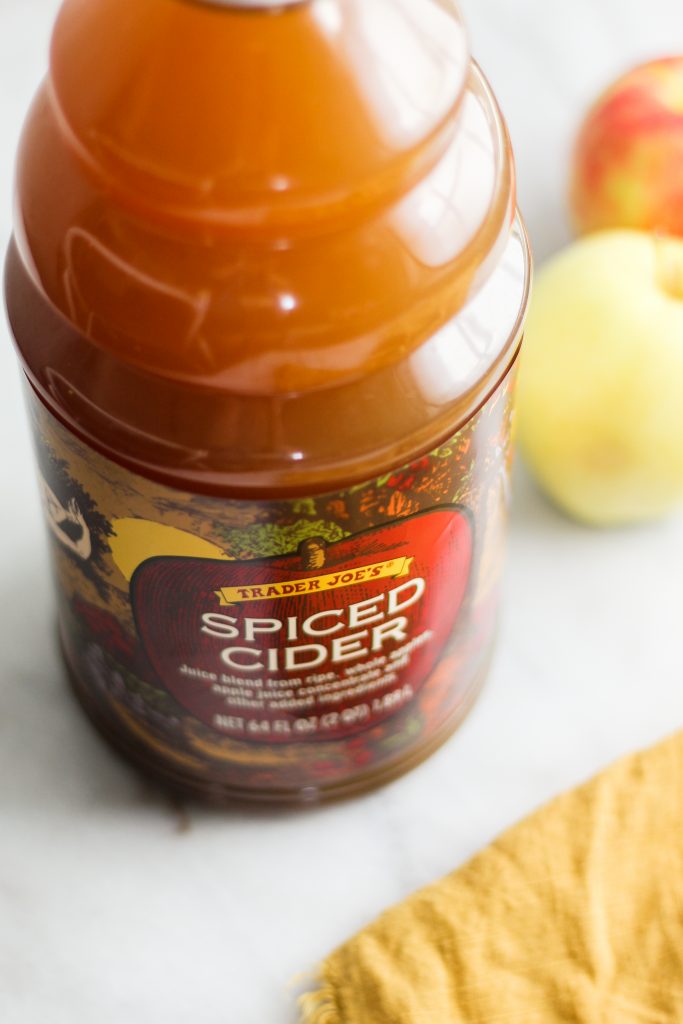 So of course, I used real apple cider. I really love the kind from Trader Joe’s because it’s Spiced! So when you shake it in the bottle, you can see all types of different spices floating around in it which makes it even better!

For the liquor in this recipe, I used my old faithful: Kraken Dark Spiced Rum. It’s just so good, y’all, and I knew that the spiciness would really add even more to the overall coziness of this drink.

For the “spritz part”, I used seltzer to add some bubbles to the drink and give it a little bit of carbonation. 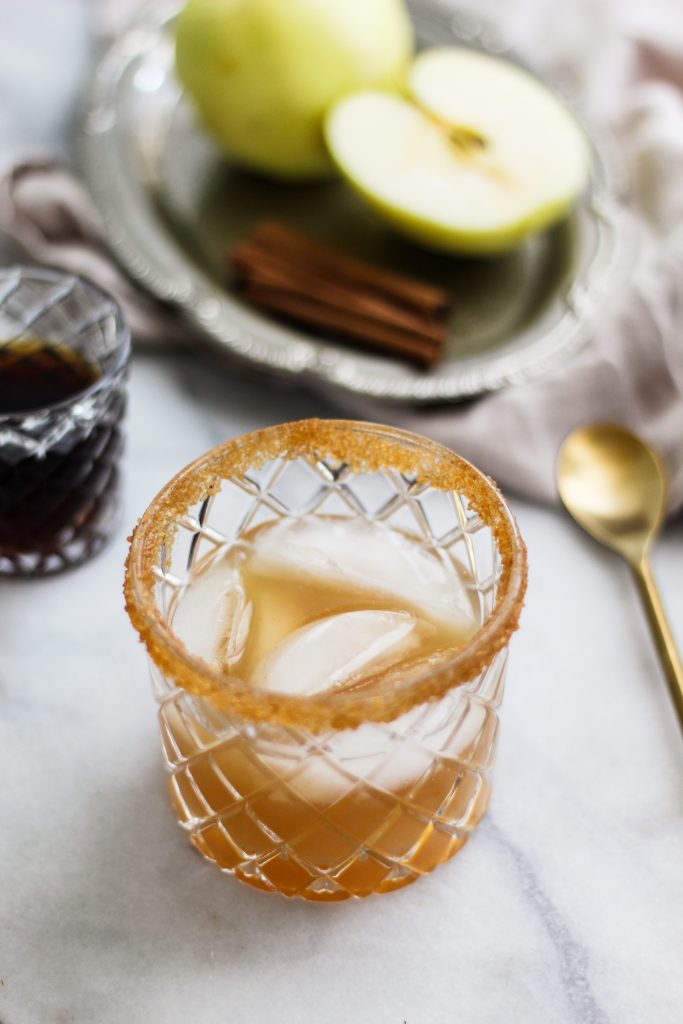 My favorite part of the drink?!

I combined turbinado sugar and cinnamon to create a crunchy, spicy and cozy cinnamon sugar rim!

When you get a bit of the crunchy sugar along with the perfectly melded together apple cider spritz – it’s truly marvelous!

So let’s get into exactly what you need for this recipe!

How to Make a Spiced Apple Cider Spritz:

Thankfully this isn’t a super hard recipe to follow.

First, if I want to make a fancy sugar rim, I always make sure to do that first!

Mix together cinnamon + turbinado sugar (highly recommend this for the crunch) on a small plate. Dip the rim of your glass in water and then in the cinnamon sugar mixture. Make sure the entire rim of the glass is fully coated with the mixture.

Next, add in ice (if desired). Side note: I really want to get those ice cubes that you keep in the fridge that won’t water down your drink. Has anyone tried those?! Let me know! 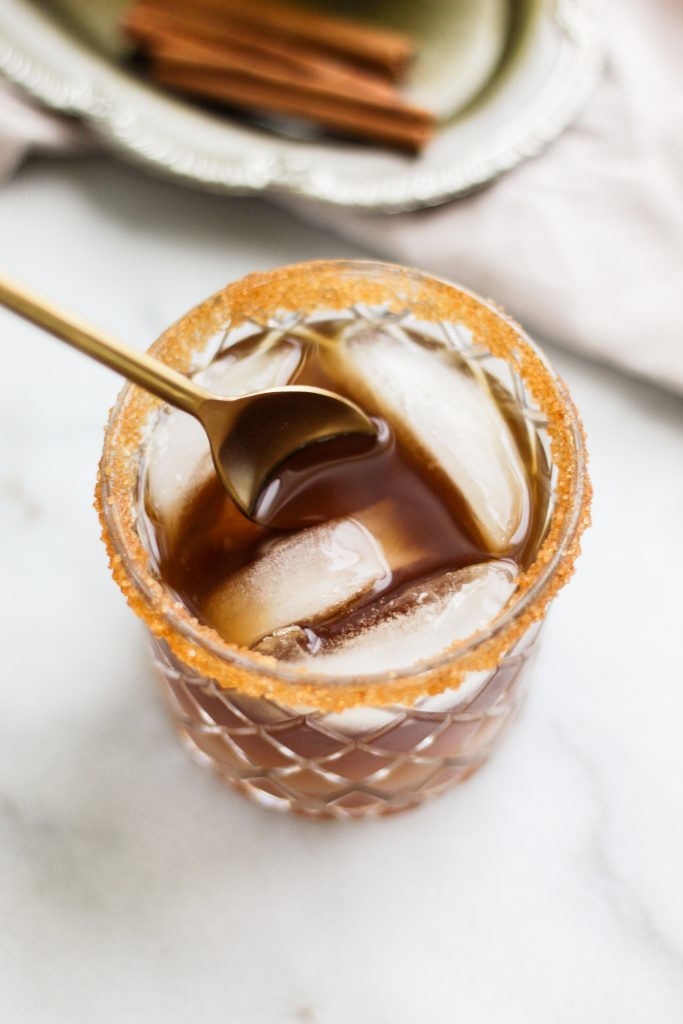 It doesn’t really matter the order for the next few things but I always like to do: apple cider first, then rum and then a splash of bubbles for the top!

For a fancy garnish, I added a cinnamon stick because hello, it’s Fall! 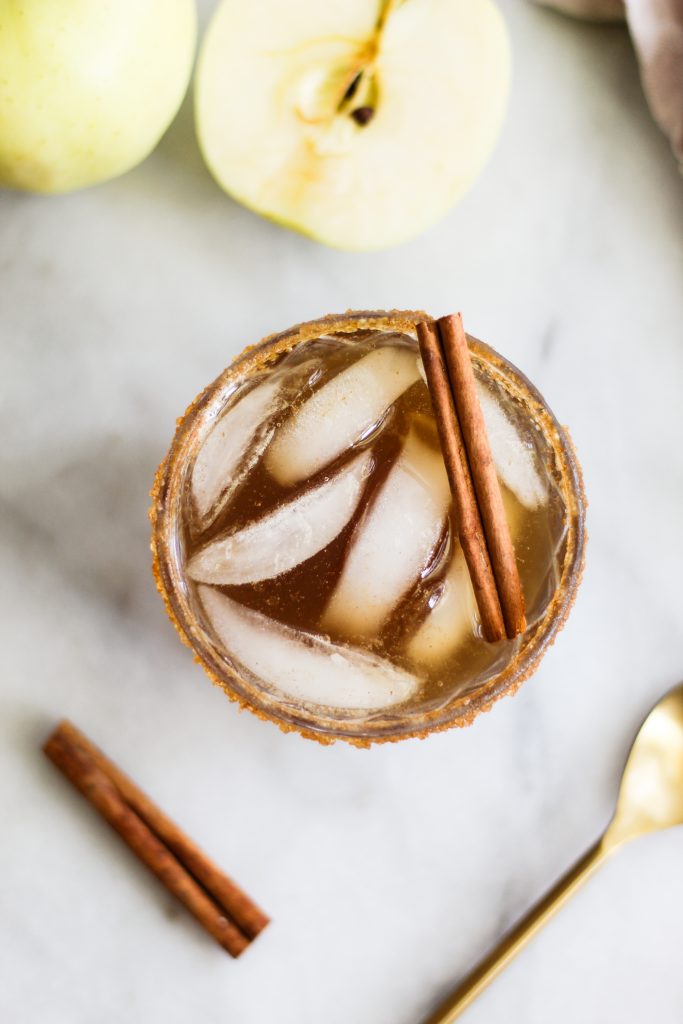 Don’t have rum? No worries! I think bourbon would also go well for this drink since it’s also dark and cozy.

Want to get really crazy and extra cozy? Try warming up the apple cider and serve the drink in a mug with NO ice! 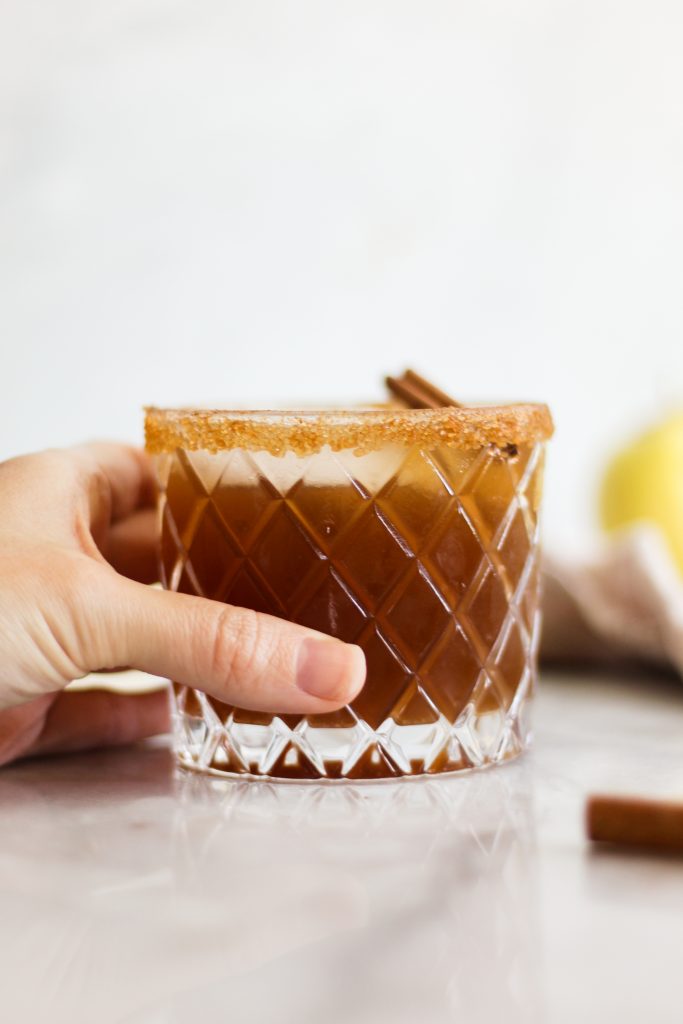 No cinnamon stick to garnish? Add thinly sliced apples instead!

Not a fan of seltzer or club soda? Try ginger beer OR prosecco for an extra fun bubbly twist. 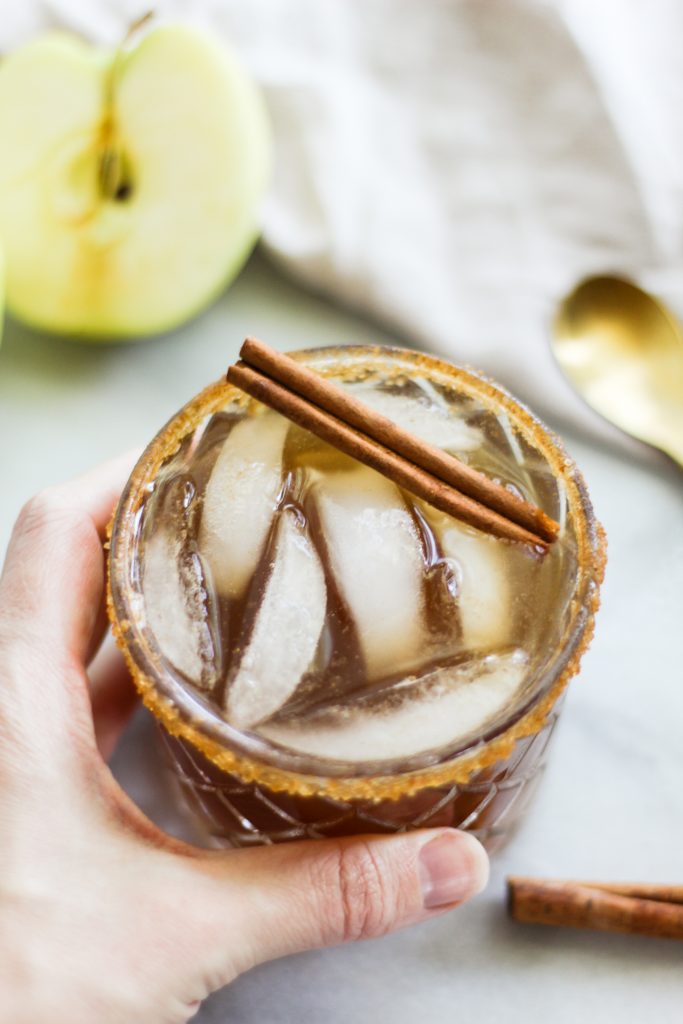 However you end up drinking this beverage, I truly hope you enjoy! 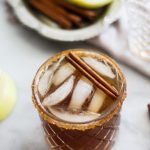 This Spiced Apple Cider Spritz is the ultimate Fall cocktail! Loaded with spiced apple cider, dark spicy rum and a splash of seltzer - this drink has it all for the most fun cocktail hour ever! Don’t forget the cinnamon sugar rim!

See substitutions above for different ingredients you can use for this drink.

This website uses cookies to improve your experience while you navigate through the website. Out of these, the cookies that are categorized as necessary are stored on your browser as they are essential for the working of basic functionalities of the website. We also use third-party cookies that help us analyze and understand how you use this website. These cookies will be stored in your browser only with your consent. You also have the option to opt-out of these cookies. But opting out of some of these cookies may affect your browsing experience.
Necessary Always Enabled
Necessary cookies are absolutely essential for the website to function properly. These cookies ensure basic functionalities and security features of the website, anonymously.
Functional
Functional cookies help to perform certain functionalities like sharing the content of the website on social media platforms, collect feedbacks, and other third-party features.
Performance
Performance cookies are used to understand and analyze the key performance indexes of the website which helps in delivering a better user experience for the visitors.
Analytics
Analytical cookies are used to understand how visitors interact with the website. These cookies help provide information on metrics the number of visitors, bounce rate, traffic source, etc.
Advertisement
Advertisement cookies are used to provide visitors with relevant ads and marketing campaigns. These cookies track visitors across websites and collect information to provide customized ads.
Others
Other uncategorized cookies are those that are being analyzed and have not been classified into a category as yet.
SAVE & ACCEPT
152 shares