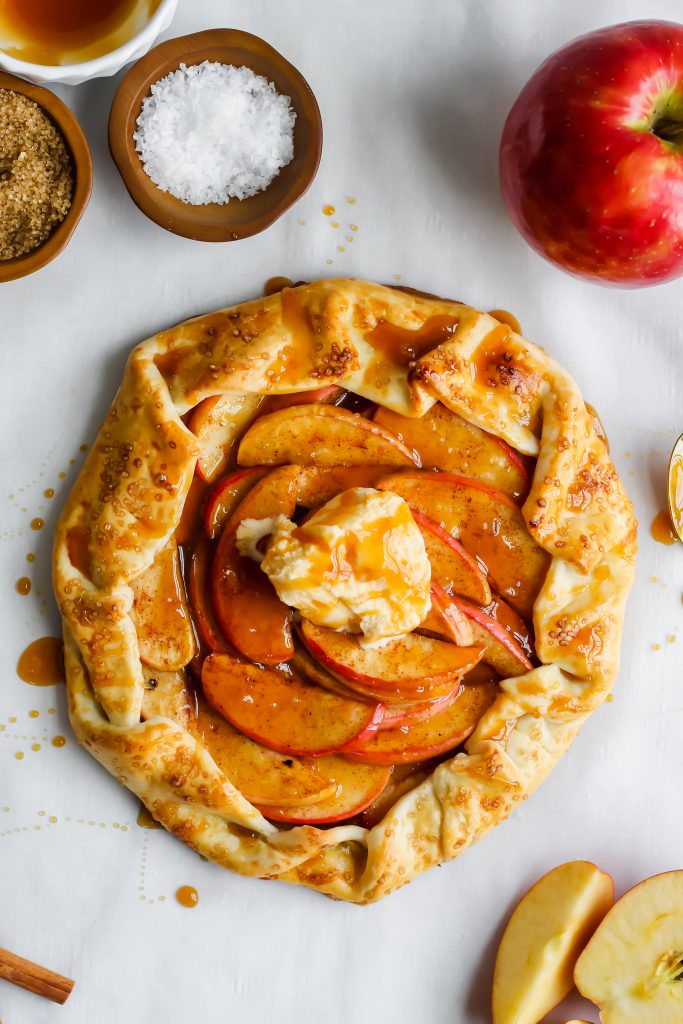 This Salted Caramel Apple Galette is an unbelievably easy and delicious dessert idea! Filled with lots of cinnamon apples, stuffed in a buttery pie crust and drizzled with a salted caramel sauce. Don’t forget the ice cream on top!

This recipe is sponsored by Wewalka! My opinions are 100% my own. Thank you for continuing to support brands that make OBB possible!

Okay, guys. We all know that I am all about the one bowl baking, super easy dessert recipes. I mean, it took me a long time to muster up the courage to begin to post baking recipes on here. I’ve always been a boxed brownie type of girl and I never made a batch of homemade cookies until I was 20.

So, going into the holiday season, I’ve been asked to bring a lot of desserts. At first, I slightly panicked but then remembered an amazing invention…PRE-MADE PIE CRUST. Yup. Specifically, Wewalka pre-made pie crust. Which is European Style bakery dough that’s extra buttery and doesn’t have ANY LARD. Yes yes yes. 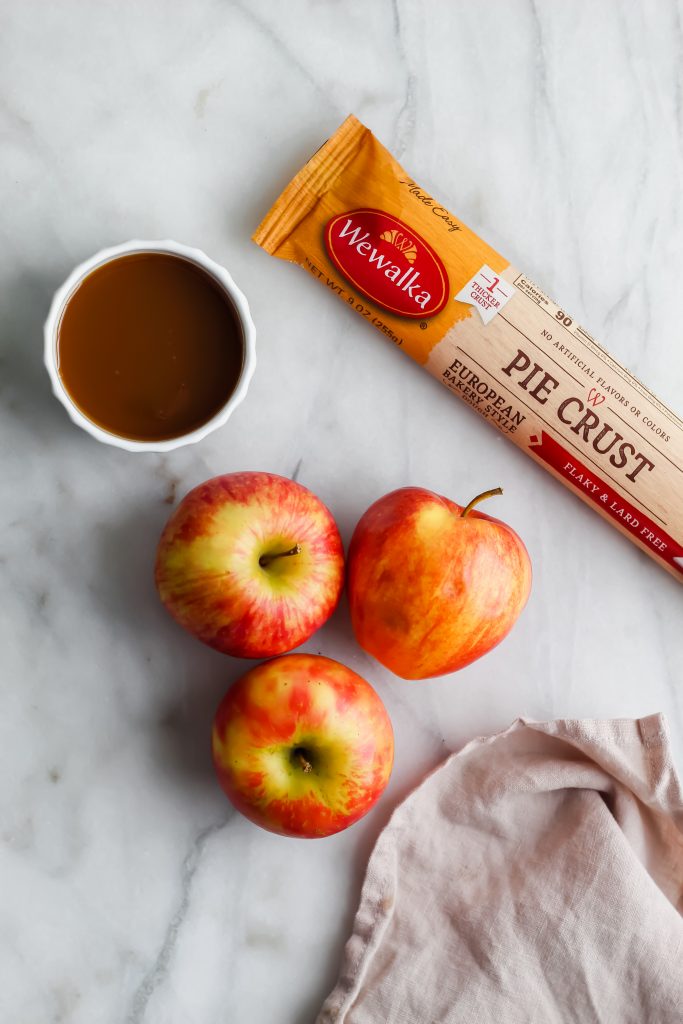 What is a Galette?

Galette’s are my go-to dessert that I make during the Holiday season. Basically, it’s a super easy version of a pie! It’s a bit more rustic and not as formal, but I personally like it that way. It uses a pie crust as the base, you fill it with a delicious fruit of choice, wrap the edges of the pie crust around the fruit to where it is still exposed and then you bake it to golden brown perfection! 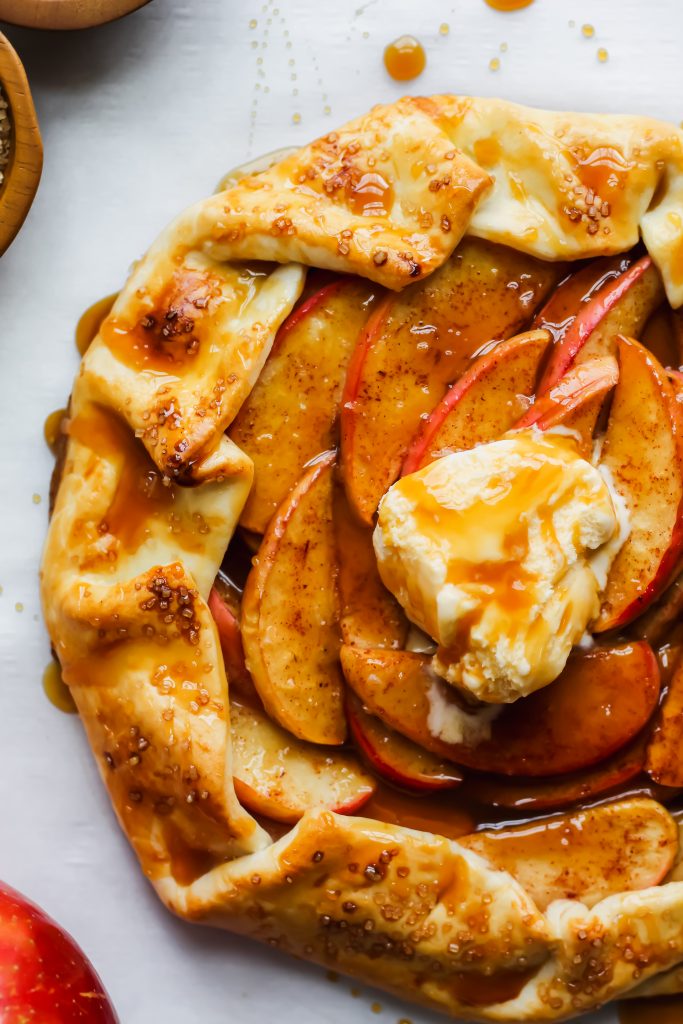 I specifically love this Salted Caramel Apple Galette. It’s perfect for those who aren’t super into pumpkin or sweet potato pies. It has deliciously soft and gooey apples in the middle mixed with cozy spices like cinnamon, nutmeg and brown sugar. The crust gets crunchy and golden brown thanks to a mixture of egg wash + extra turbinado sugar. 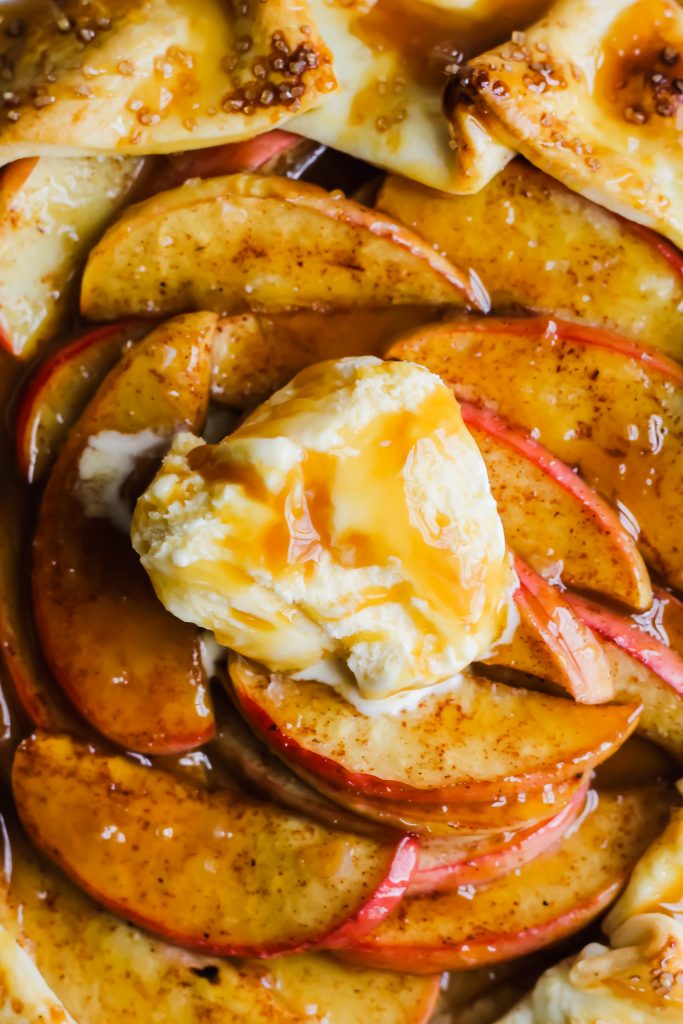 Then HELLOOOOO salted caramel sauce! Feel free to make your own homemade caramel but during the holidays, I’m all about convenience. Hence why I use store-bought caramel sauce. I added flaky sea salt to it. The addition of the salt seriously adds SUCH depth. It is truly amazing. 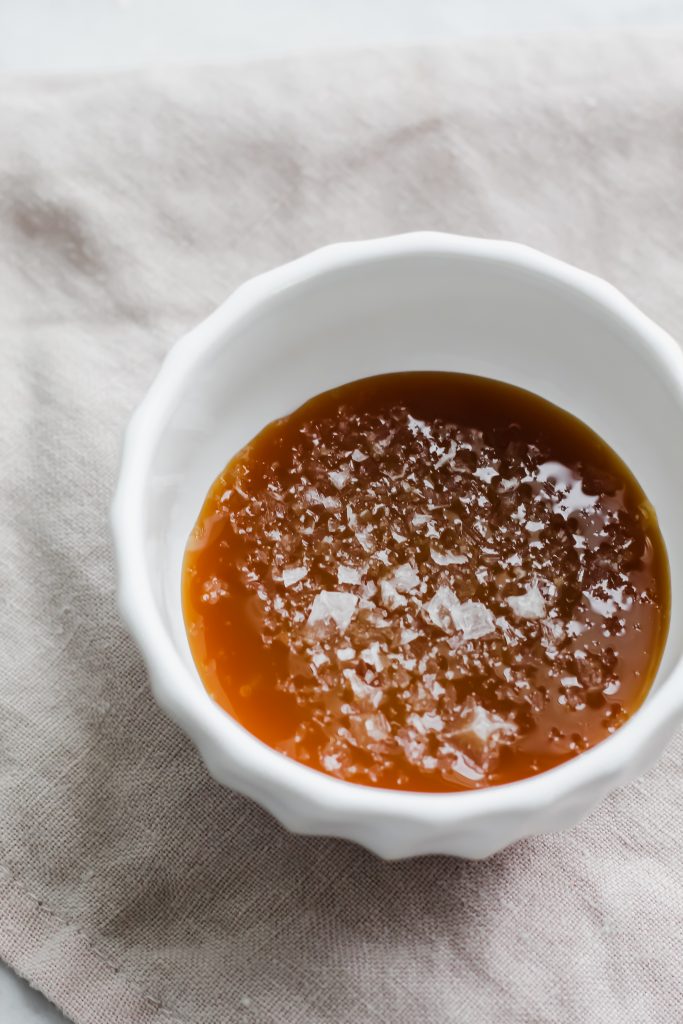 Lastly, you must always top galettes with either homemade whipped cream or in this case, vanilla ice cream! It completes it perfectly! Let’s get into how to make it!

First step is to take your Wewalka pie crust out of the refrigerator and let it come to room temperature for 20 minutes!

Preheat the oven to 425 degrees. Slice 2-3 large honeycrisp apples (about 3 cups worth) into thin long slices. Place these in a bowl. To the bowl, add cornstarch, cinnamon, nutmeg, brown sugar, turbinado sugar, and and the juice of half of a lemon (this adds acidity and helps the apples not oxidize aka turn brown!)

Toss gently, making sure the apples are evenly coated in everything. 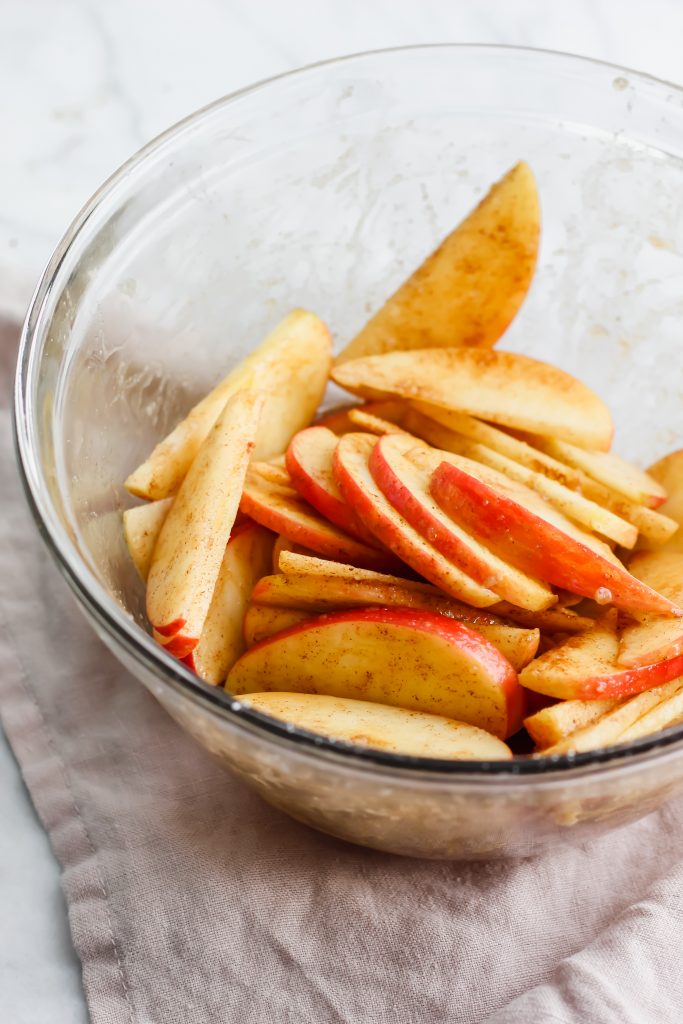 Take a large baking pan and roll out the pie crust. Wewalka automatically comes with parchment paper underneath which is AH-mazing!

Place the apples in the middle of the pie crust, leaving about 1.5 to 2 inches of pie dough to fold over the fruit. 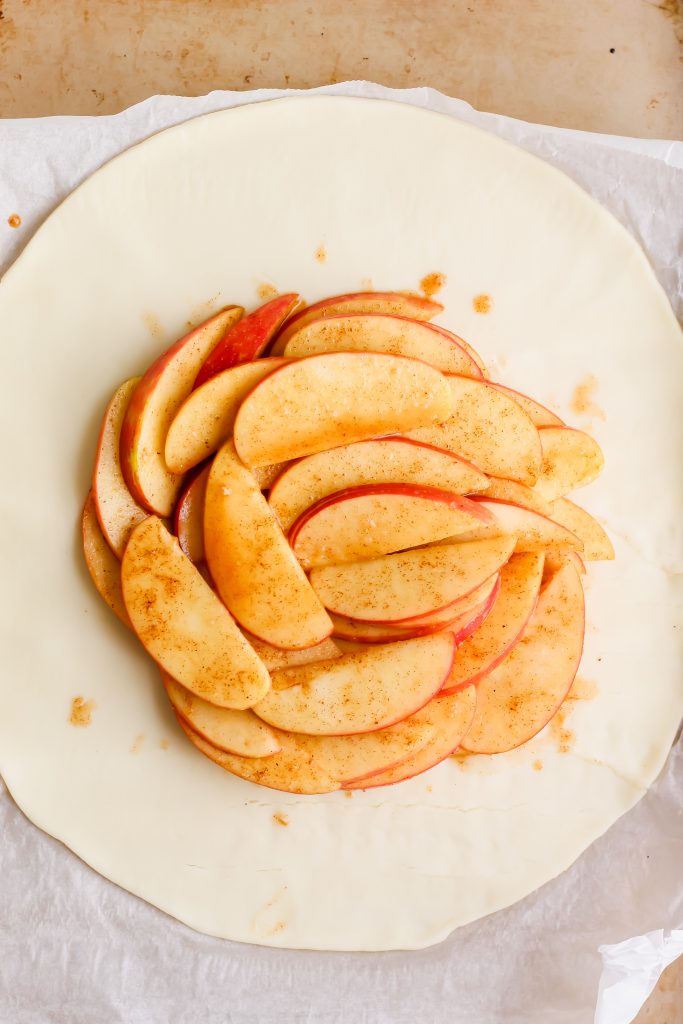 When the apples are placed, take the pie dough and gently fold it over the fruit, pinching the seams each time you fold it to make sure the apples are held inside. 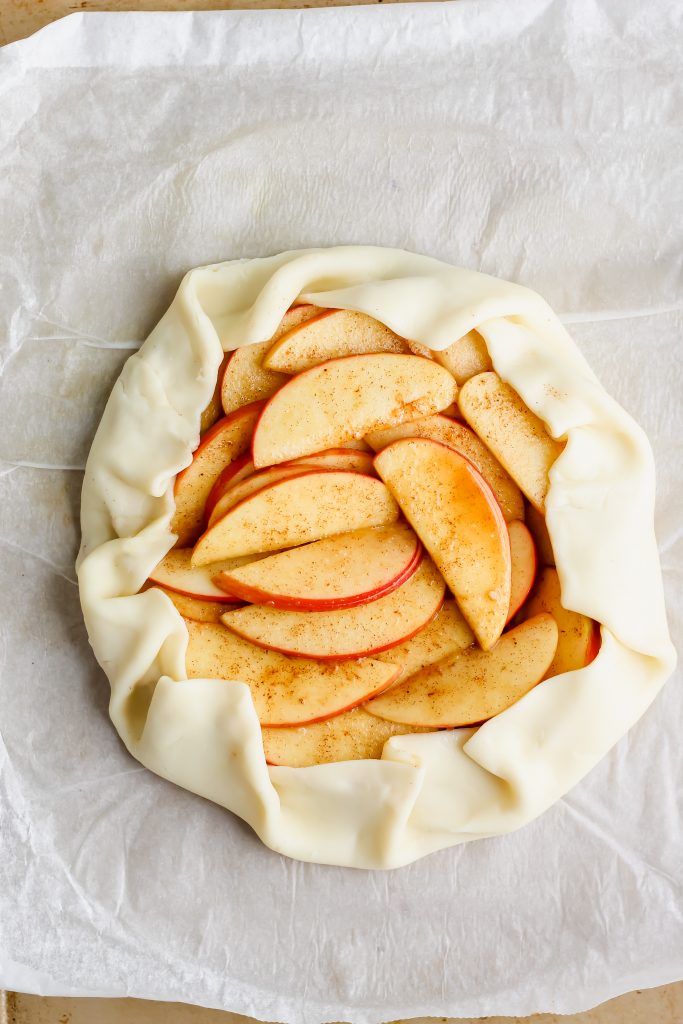 Next, make the egg wash. In a small bowl, gently beat one egg. Brush the outside crust of the pie with the egg wash (don’t over-do it! Just a light brushing) and then sprinkle the outside with turbinado sugar to make it extra crunchy and delicious!

Bake for 15-20 minutes or until the crust is golden brown. 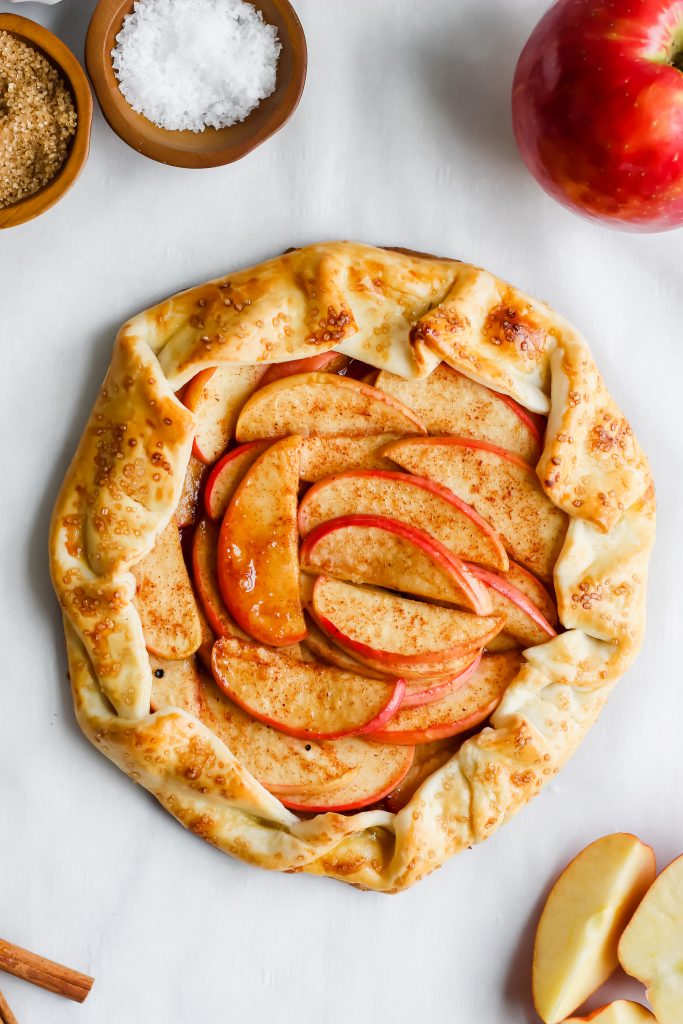 While it’s baking, mix about ¼ cup of caramel sauce with a few pinches of flaky sea salt. Mix together. Taste and adjust if you want it saltier. 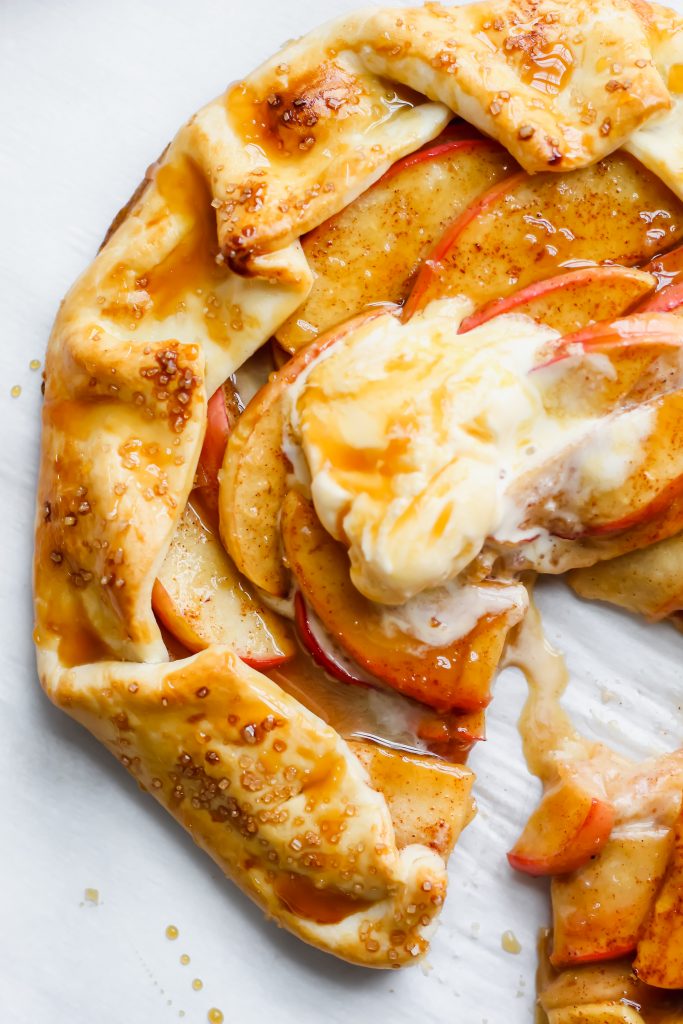 By now, the Salted Caramel Apple Galette should be done baking! Remove from the oven and let it cool for another 15 minutes.

Add on a scoop of ice cream or whipped cream if desired and enjoy! Pro tip: I sprinkled a little bit of extra salt on top of mine because I absolutely love the idea of salty sweet desserts. 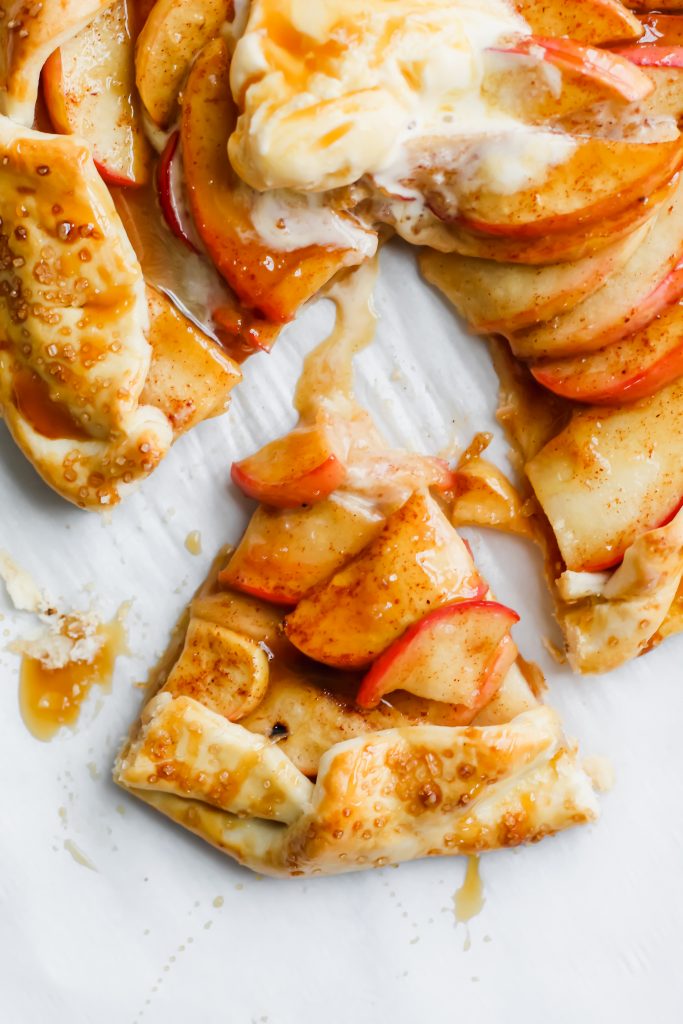 Hope you all have an amazing Thanksgiving and enjoy this super easy dessert recipe! 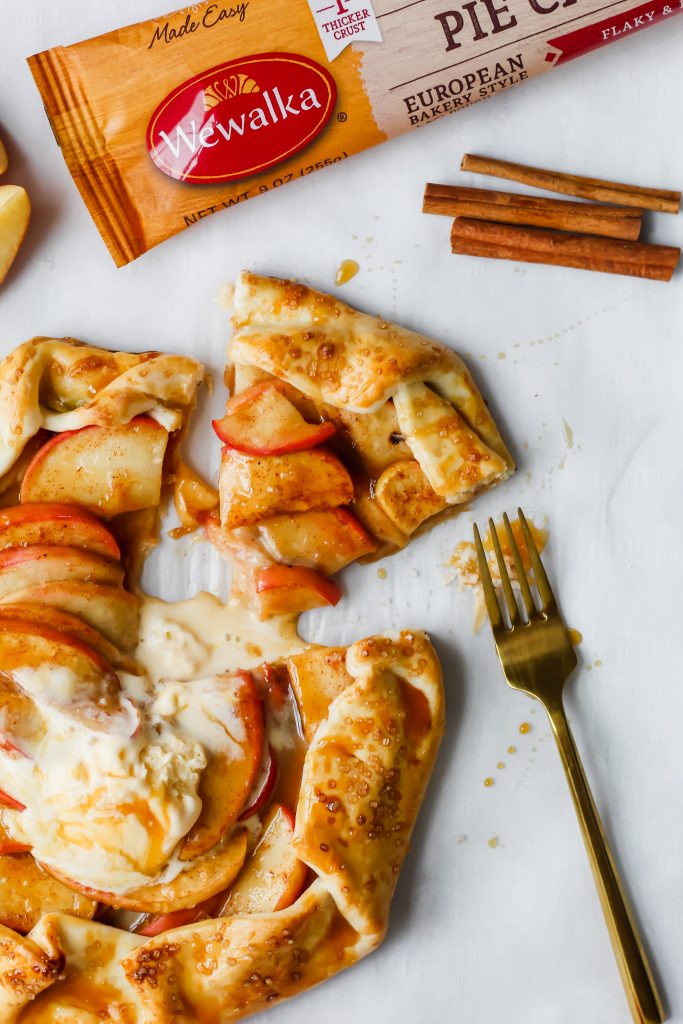 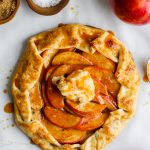 This Salted Caramel Apple Galette is an unbelievably easy and delicious dessert idea! Filled with lots of cinnamon apples, stuffed in a buttery pie crust and drizzled with a salted caramel sauce. Don’t forget the ice cream on top!

Feel free to make a homemade caramel sauce and add flaky sea salt to it.

If not using a Wewalka pie crust, follow baking time instructions on the package of the one you are using 🙂

This website uses cookies to improve your experience while you navigate through the website. Out of these, the cookies that are categorized as necessary are stored on your browser as they are essential for the working of basic functionalities of the website. We also use third-party cookies that help us analyze and understand how you use this website. These cookies will be stored in your browser only with your consent. You also have the option to opt-out of these cookies. But opting out of some of these cookies may affect your browsing experience.
Necessary Always Enabled
Necessary cookies are absolutely essential for the website to function properly. These cookies ensure basic functionalities and security features of the website, anonymously.
Functional
Functional cookies help to perform certain functionalities like sharing the content of the website on social media platforms, collect feedbacks, and other third-party features.
Performance
Performance cookies are used to understand and analyze the key performance indexes of the website which helps in delivering a better user experience for the visitors.
Analytics
Analytical cookies are used to understand how visitors interact with the website. These cookies help provide information on metrics the number of visitors, bounce rate, traffic source, etc.
Advertisement
Advertisement cookies are used to provide visitors with relevant ads and marketing campaigns. These cookies track visitors across websites and collect information to provide customized ads.
Others
Other uncategorized cookies are those that are being analyzed and have not been classified into a category as yet.
SAVE & ACCEPT
508 shares