This Homemade Vanilla Cashew Milk is made with only 5 simple ingredients! It’s ultra creamy, made with real vanilla extract and cinnamon. I promise you won’t buy store-bought cashew milk after you make this!

Y’allllll. This Homemade Vanilla Cashew Milk is SO luscious. It’s super creamy, loaded with cinnamon, vanilla and slightly sweetened thanks to a little bit of maple syrup. It’s pure, delicious and my new go-to drink.

I can’t believe this is the first time I have ever made my own nut milk. I’ve been drinking nut milk for about 3 years now – I started with almond (unsweetened vanilla always). But then, I started with cashew milk. I found it to be much more flavorful and a million times creamier. I never went back! However, it’s no secret that it’s EXPENSIVE.

So, when Ellie’s Best contacted me to send me their nut milk bag – I jumped at the opportunity! Guys, this nut milk bag is the BEST selling one on Amazon. It’s ridiculously easy to use and for the budget conscious folks like me, it’s very affordable! Disclaimer: Y’all know that I only work with brands that I really love, right? And that I think y’all will love to? Okay just checking. I would never use a brand that I didn’t fully believe in and I will always post my honest opinion. Okay, back to the post!

Many recipes that you see will tell you that simply a high powered blender will do the trick for your own homemade nut milk. I tried it out without the nut milk bag and y’all, it just didn’t do the trick. There were so many cashew pieces still left – and I own a Vitamix! That’s pretty much one of the most high powered blenders you can get. BY THE WAY, we won the Vitamix in a giveaway and I’m forever grateful for it haha!

The nut milk bag WORKED. Don’t believe me? Let’s go through the process of making it!

Great news! It’s super simple. Soak your cashews from at least 12 hours. After the cashews are soaked, rinse them thoroughly. Place the ingredients listed above in your blender. Blend on high for about 1 minute. It will get super frothy. Once it’s frothy and blended well, place your Ellie’s Best Nut Milk Bag in a large bowl. Pour the milk directly into the bag. Pick up the bag and begin kneading and squeezing the remaining milk from the bag. Believe me, you’ll want to save every drop of this stuff! This is when I said that you need a nut milk bag to really get the creamy milk – Here’s what was still in the nut milk bag post-squeeze. That’s a LOT of remnants! And after that, you’re all done! Pour your cashew milk from the bowl into a mason jar and drink away! Why Soak the Cashews?

It’s best to soak your cashews overnight in water for at least 12 hours. This will soften them and make them easier to blend! Not to mention it’s better for your digestion.

What can I make with Homemade Vanilla Cashew Milk?

If you want to use it in a recipe, I recommend using it for the following:

Dip a Soft Chai Snickerdoodle in it

Or, if you’re like me, you can drink it directly from the cup because it’s THAT delicious. Be sure to follow ourbalancedbowl on Instagram and tag me with your photo! You can also post a photo of your recipe to theOur Balanced Bowl Facebook page! I always love to see your re-creations! If you do make it, be sure to rate and comment so I can get your feedback! Xo!

Disclaimer: This recipe was not sponsored by Ellie’s Best. They sent me the nut milk bag. All opinions are my own. 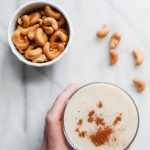 This Homemade Vanilla Cashew Milk is made with only 5 simple ingredients! It’s ultra creamy, made with real vanilla extract and cinnamon. I promise you won’t buy store-bought cashew milk after you make this!

This website uses cookies to improve your experience while you navigate through the website. Out of these, the cookies that are categorized as necessary are stored on your browser as they are essential for the working of basic functionalities of the website. We also use third-party cookies that help us analyze and understand how you use this website. These cookies will be stored in your browser only with your consent. You also have the option to opt-out of these cookies. But opting out of some of these cookies may affect your browsing experience.
Necessary Always Enabled
Necessary cookies are absolutely essential for the website to function properly. These cookies ensure basic functionalities and security features of the website, anonymously.
Functional
Functional cookies help to perform certain functionalities like sharing the content of the website on social media platforms, collect feedbacks, and other third-party features.
Performance
Performance cookies are used to understand and analyze the key performance indexes of the website which helps in delivering a better user experience for the visitors.
Analytics
Analytical cookies are used to understand how visitors interact with the website. These cookies help provide information on metrics the number of visitors, bounce rate, traffic source, etc.
Advertisement
Advertisement cookies are used to provide visitors with relevant ads and marketing campaigns. These cookies track visitors across websites and collect information to provide customized ads.
Others
Other uncategorized cookies are those that are being analyzed and have not been classified into a category as yet.
SAVE & ACCEPT
98 shares