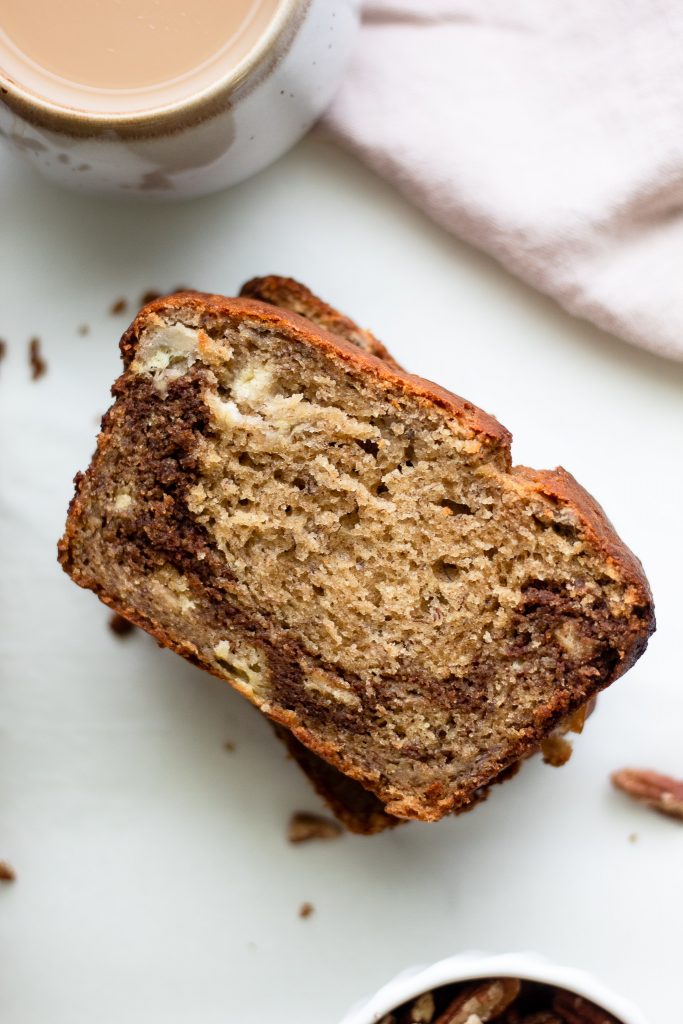 This Brown Butter Cinnamon Swirl Banana Bread is the ultimate easy and delicious quick bread! Loaded with nutty Fall flavors thanks to the brown butter and cinnamon, it’s cozy and oh so delicious!

You guys! Another season, another quick bread amiright?!

I do love many types…all the types of quick bread, like, Coconut Chocolate Chunk Zucchini Bread, my beloved Cinnamon Peach Bread and the OG Chocolate Chip Banana Bread.

But there is something extra cozy and comforting about this particular banana bread. Maybe it’s because I always have an abundance of ripe bananas in my fruit bowl just begging to be made into this thick, dense loaf. 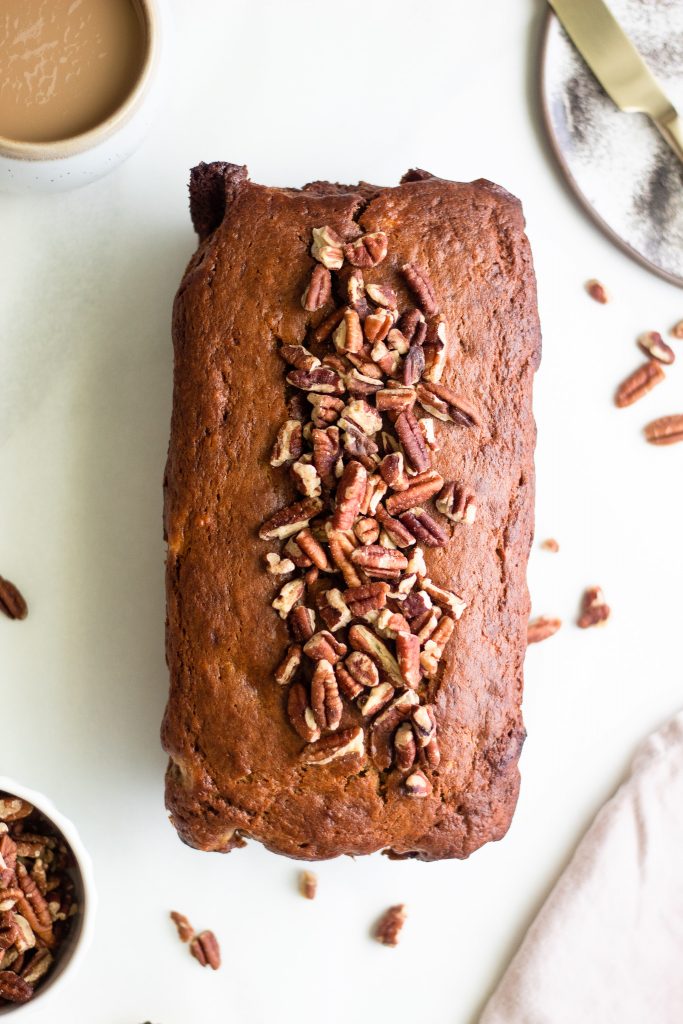 Or maybe it’s because it’s finally Fall and I really want my house to smell like banana bread all the time.

Either way, I’m all in and super swooning over this Brown Butter Cinnamon Swirl Banana Bread (yes I know, it’s a mouthful!)

Why You’ll LOVE This Bread:

Well first off, I have two words for you: BROWN BUTTER.

If you aren’t sure of the amazingness of brown butter, I encourage you to try it out! It’s basically a method of melting butter in a pan until it’s frothy and golden brown (but not burnt of course!)

It adds incredible flavor – especially a hint of nuttiness to the bread. It pairs perfectly with the other spices you find! 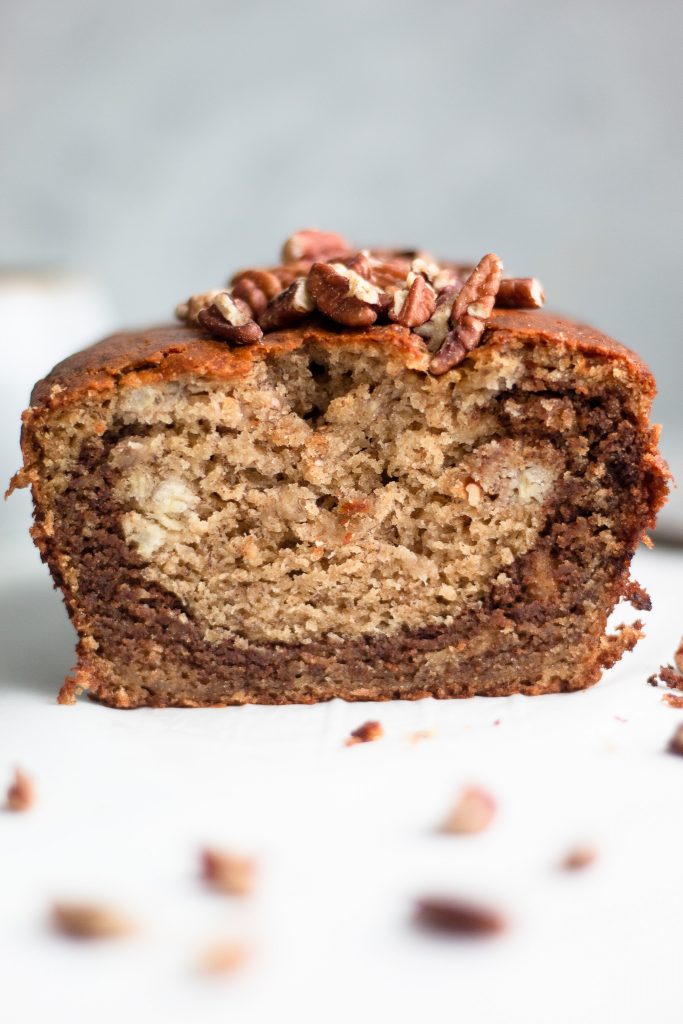 The natural sweetness of the banana comes through in each bite and of course, that cinnamon swirl is just perfection! It’s the epitome of Fall and I feel like I want a cinnamon swirl in every single one of my baked goods this season.

The loaf is dense with flavor, so moist, soft, fluffy and of course, just has the best taste!

So let’s get into what you need to make it!

Begin by preheating the oven, my darlings! Then, it’s time to start the brown butter I was talking about earlier.

Grab your favorite pan and place it on medium heat. Add in an entire stick of butter – I like to use salted, and let it melt down, stirring occasionally. 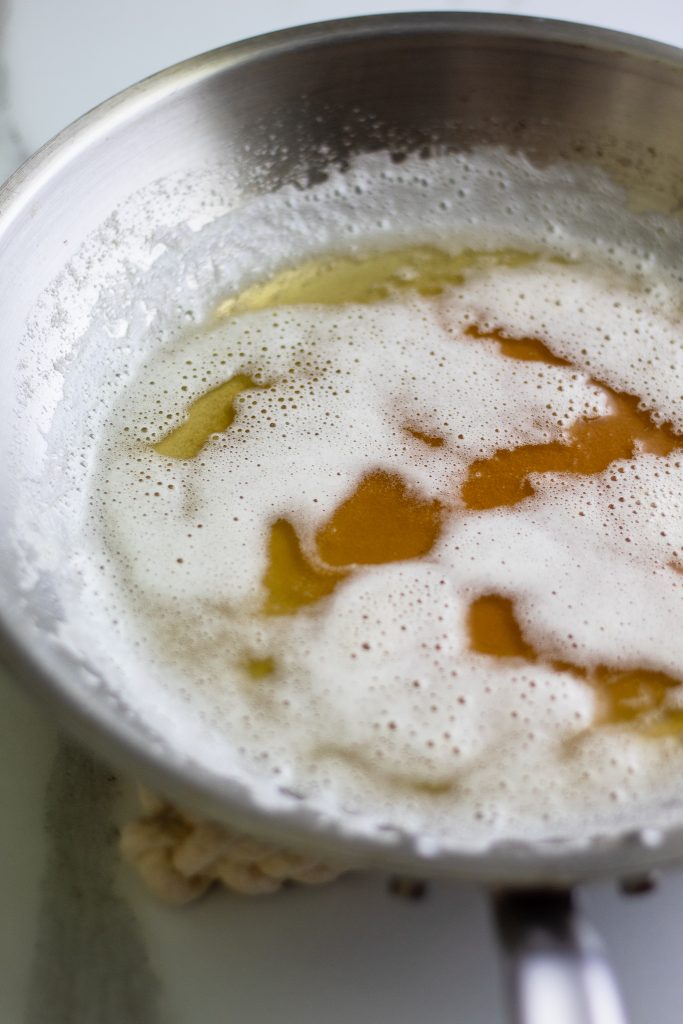 Soon you will begin to notice it foaming at the top, continue to stir it and it will eventually become a golden brown color. Be sure not to let it burn! It should take about 6-7 minutes overall.

Once it’s browned, add it to a large glass bowl and let it cool down.

While that’s cooling, grab those super ripe bananas and begin to mash them up in a bowl until they have as little lumps as possible!

To the brown butter, add in the delightful sugar we all know and love and whisk it up until it’s combined. Then add the wet ingredients which include eggs, vanilla extract and sour cream. 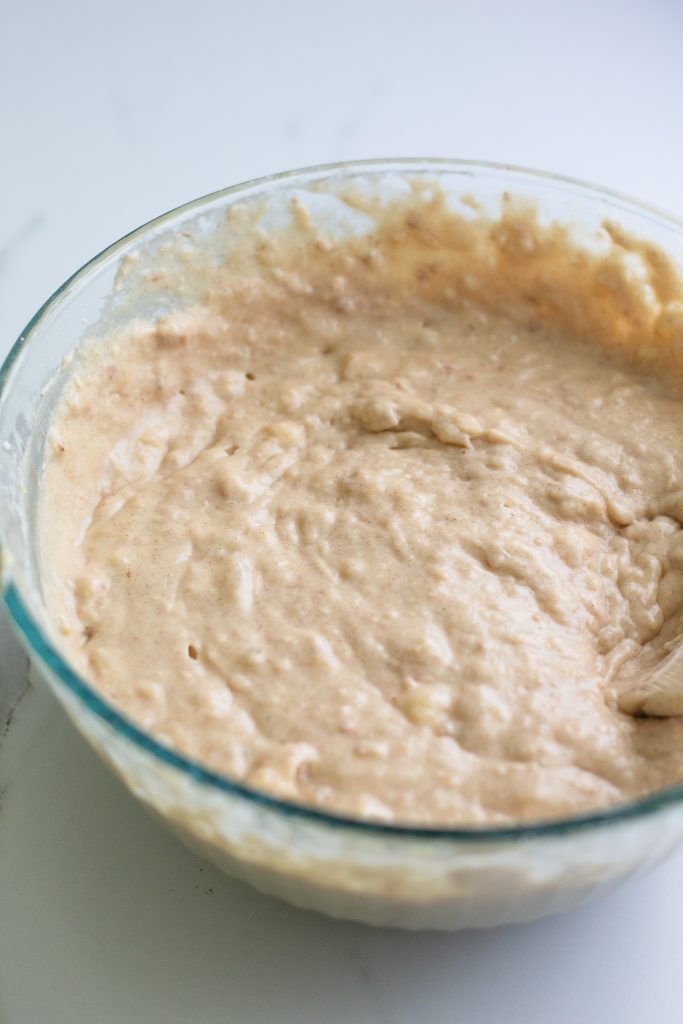 I often substitute greek yogurt for the sour cream and it works just as well – by the way!

Finally stir in those mashed bananas. Try not to eat the batter – it’s going to smell really good though!

Add in the dry ingredients directly to the wet and stir to combine, making sure they are very evenly distributed.

Grab your favorite 9×5 loaf pan and grease it or add parchment paper, whichever you prefer!

Add half of the batter into the pan. 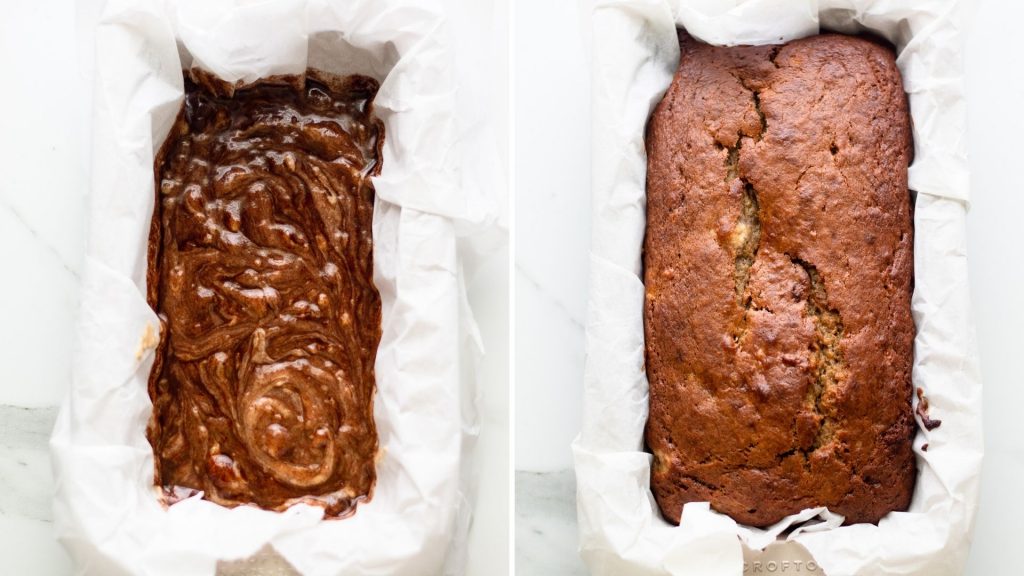 Time for the cinnamon swirl! Add cinnamon and sugar into a small bowl and mix it up. Add in melted butter as well and mix until it has a paste-like consistency. 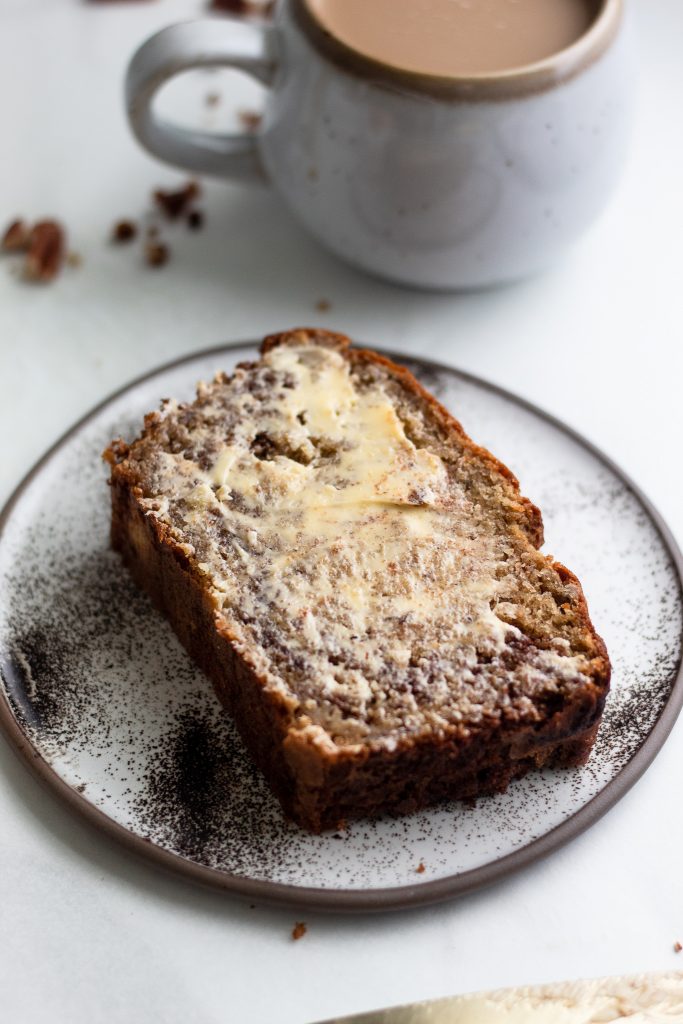 Time to bake! Get ready for your house to smell AH-MAZING.

You can garnish this bread with nuts once it comes out of the oven or skip them. Make sure to let it cool COMPLETELY before you cut into it! 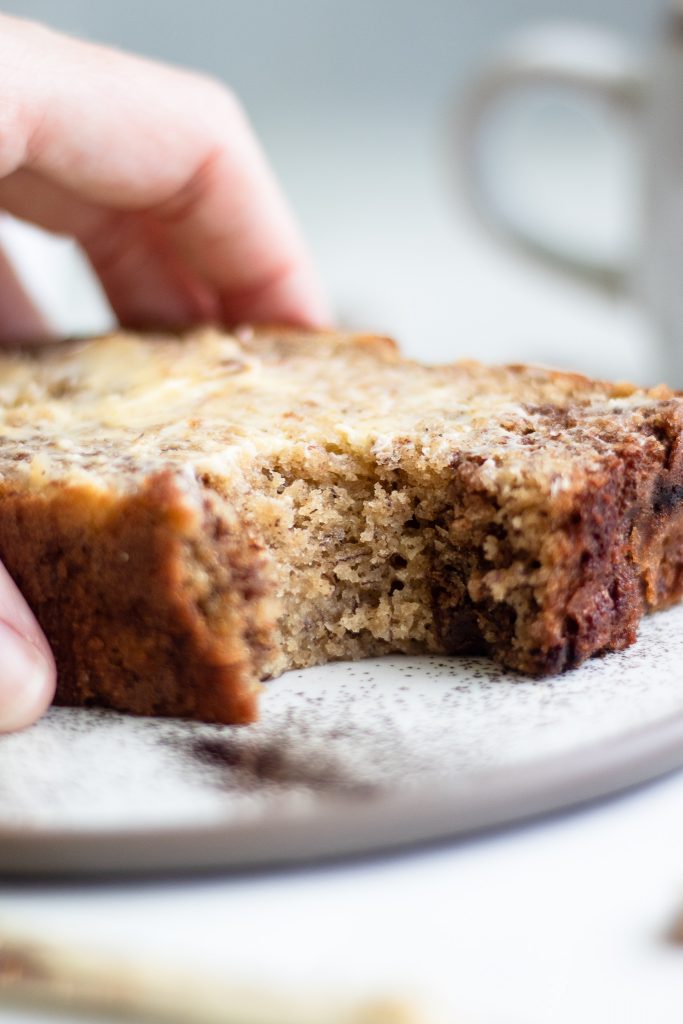 Once sliced, add a smidge of butter, a pinch of cinnamon and savor every bite! 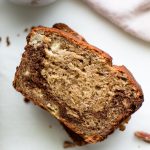 This Brown Butter Cinnamon Swirl Banana Bread is the ultimate easy and delicious quick bread! Loaded with nutty Fall flavors thanks to the brown butter and cinnamon, it’s cozy and oh so delicious!

This website uses cookies to improve your experience while you navigate through the website. Out of these, the cookies that are categorized as necessary are stored on your browser as they are essential for the working of basic functionalities of the website. We also use third-party cookies that help us analyze and understand how you use this website. These cookies will be stored in your browser only with your consent. You also have the option to opt-out of these cookies. But opting out of some of these cookies may affect your browsing experience.
Necessary Always Enabled
Necessary cookies are absolutely essential for the website to function properly. These cookies ensure basic functionalities and security features of the website, anonymously.
Functional
Functional cookies help to perform certain functionalities like sharing the content of the website on social media platforms, collect feedbacks, and other third-party features.
Performance
Performance cookies are used to understand and analyze the key performance indexes of the website which helps in delivering a better user experience for the visitors.
Analytics
Analytical cookies are used to understand how visitors interact with the website. These cookies help provide information on metrics the number of visitors, bounce rate, traffic source, etc.
Advertisement
Advertisement cookies are used to provide visitors with relevant ads and marketing campaigns. These cookies track visitors across websites and collect information to provide customized ads.
Others
Other uncategorized cookies are those that are being analyzed and have not been classified into a category as yet.
SAVE & ACCEPT
12 shares